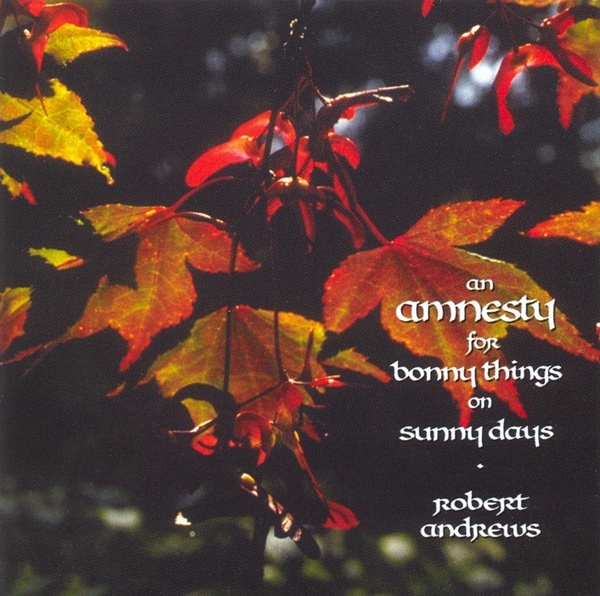 Britain’s Robert Andrews plays guitar and bass for Land of Yrx and Aerie, bands with whom he’s released over a dozen albums. An Amnesty for Bonny Things on Sunny Days is his first solo outing. For the most part, this CD’s seven tracks (one of which is untitled) are extended compositions of soothing instrumental music. Acoustic guitar, bass, and keyboards (primarily played by Andrews, although a few friends help out) are the main voices used to express melodies that are slow, sweet and simple. The arrangements are minimal, even sparse, with only one or two instruments typically being played at any given time. The album has an overall pastoral quality— especially on “Earth and Stone” and “Landfall”— that reminds me of Anthony Phillips and the gentler side of Mike Oldfield: a slow-paced, bucolic delicacy that one imagines was composed in a cozy little cottage in the English countryside. That said, there isn’t nearly as much here in the way of thematic development such as one would expect from either Phillips or Oldfield. The tunes are certainly quite pretty, but often they just seem just a bit aimless and meandering. Then again, I think that’s deliberate, as all the music on this album seems intended to float airily and lazily rather than being suborned to a developmental structure. Recommended for those seeking mood music to put on while curling up with a book on a drizzly autumn day.

Simon Phillips - Another Lifetime – Simon Phillips is a drummer who has little to prove nowadays, what with the monstrous level of playing ability he has cultivated over the years. Terry Bozzio is perhaps his closest competitor...  (1999) » Read more