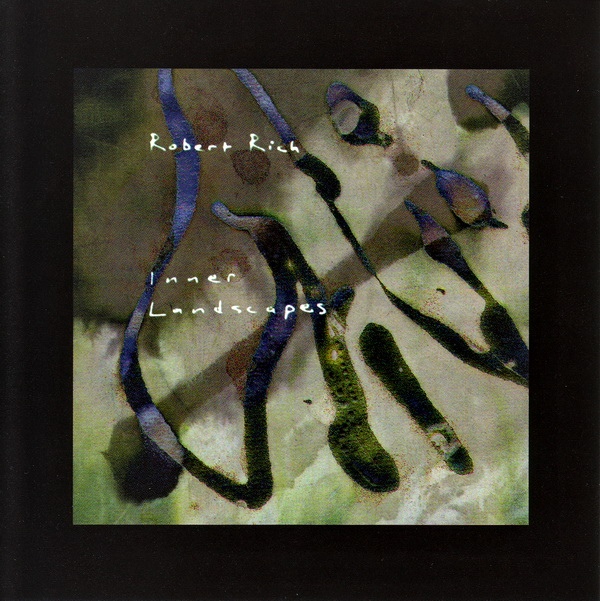 Based on a March 9, 1985 concert, Inner Landscapes has had two incarnations, both of them different enough to be notable. After (or around the same time as) his first three studio-based cassettes, Rich released the cassette Live and then his first non-cassette album, Numina. After this the Auricle label reissued the Live cassette as well as releasing Inner Landscapes. This concert in particular is notable for changing the mood quite a bit from his early work, and it's quite representative of the darker territory some ambient artists in the mid to late 80s explored (both Steve Roach and Lightwave come to mind). Music like this always sort of reminds me of a soundtrack to Charon transporting the souls of the dead on the river Styx. It's as if you're hearing the resounding echoes of the voices of the damned through subterranean caverns only for them to fade away into silence until the boat goes around the next bend. The cassette and later CD version of this uses different edits from this concert and even though there must be a lot of overlap, the sequencing really mixes up the feel in both versions to the point that when Inner Landscapes was reissued on CD, I never felt that it replaced the tape version. Also, this sort of nighttime ambient was dramatically different from subsequent releases Geometry and Rainforest, both of which demonstrated an incredible breadth and acuity of vision, one that still continues to this day. This one, however has always had a touch of mystery, as if by the very end of the underground journey, Charon has floated onto the branch known as Lethe and my preceding memories fade away until the very next listen.

There is a wealth of music to be found on Audion / Ultima Thule’s Auricle cassette label. Right off the bat, there are the Peter Frohmader classics Jules Verne Cycle and Orakel / Tiefe, the early Lightwave cassettes, and Robert Rich’s fourth and fifth cassettes, Live and Inner Landscapes. Be advised that this is not the same mix or sequence as the Auricle tape, although the music is all pulled from the same concert of March 9, 1985, Berkeley, California, and it can’t comfortably be considered its reissue or a new release. There are a number of differences between the tape and CD, such as the lack of the tape’s opening track “Approach” on the CD, and the different track order. The remastered and edited form on the CD; however, it is sonically far superior to the cassette. Without the sequencer opener “Approach,” the CD of Inner Landscape seems more directly related to the days of the classic Trances and Drones, with a mostly atmospheric base created by warm analog synthesizers, a dense blend that Rich mastered early in his career. The layers of effects and the sounds that fall ambiguously between synthesizer programming and environmental ambiances are far more vivid here than on the Auricle tape. The result of the new version is that a new CD is created of classic caliber, while the tape remains an equally interesting and indispensable item. Two versions of Inner Landscapes taken from the Berkeley March 9, 1985, show, and two distinctly different and excellent albums. Extremely highly recommended.

Upsilon Acrux - Galapagos Momentum – As math rock goes, Galapagos Momentum is like solving linear transformations in n-dimensional vector spaces while spinning around on a gyroscope ride at the carnival. For those of us crazy enough to...  (2008) » Read more

Preston Reed - Handwritten Notes – If you think that the acoustic guitar is a conventional instrument then you haven’t heard Preston Reed play it. Combining a tapping approach that is considerably evolved from the style of the...  (2001) » Read more