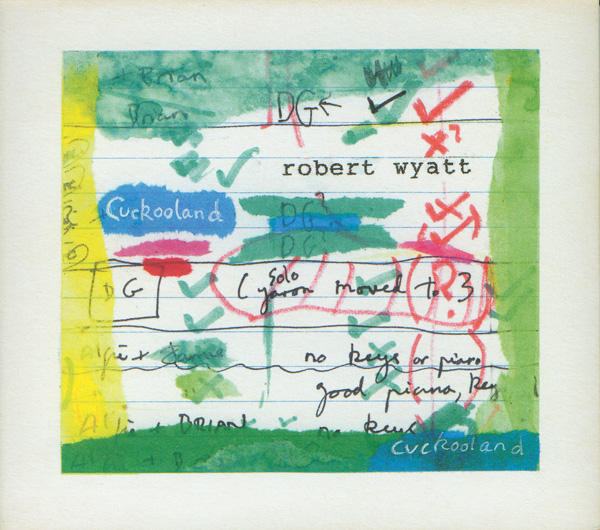 Robert Wyatt is so much an entity unto himself that comparisons to anyone else are more or less useless. Most listeners with a rock background would probably peg his music as jazz, though I suspect most mainstream jazz fans would not know what to make of him. A lot of listeners of all stripes have difficulty with his singing voice – if you’re in this camp, I urge you to keep listening. It will grow on you. In spite of his distinctive thin tone and heavy accent, his intonation and expressiveness are impeccable. For me, the most endearing factors in Wyatt’s music are his combination of earnest sincerity and puckish humor, and his adventurous taste in arrangement. And his ability to pick just the right musicians to accompany him. And his refusal to honor conventional genre boundaries. And... well, enough of that. For his fans, this is an outstanding addition to the oeuvre; for the uninitiated, it’s an excellent starting point. Somehow, amid all the genre-melding, this set of tunes manages a simple charm that’s hard to resist. There are hints of New Orleans jazz, Tin Pan Alley, the Middle East, ambient electronics, French café music, warped Beat Poetry, 20th Century minimalism, and more, all smeared seamlessly together. Trumpet and trombone are the most common foils to Wyatt’s voice, maintaining the jazz feel even when electronic instruments provide some of the backing. If you’re looking for interesting music that won’t necessarily rock your socks off, you could hardly do better than this.

With Cuckooland Robert Wyatt changes direction once again, this time toward jazz. Perhaps “Old Europe” is an early clue to the disc’s orientation, with its lyrical jazz references to a Paris record shop, jazz club, and Miles Davis. Still following in his “full band” direction, the disc is chock full of musicians from hugely varying backgrounds, each of them lending their own expertise while leaving Wyatt’s signature intact. One never knows what combination of instruments he’ll use from song to song, which is part of the delight: drums, bass, cornet, keyboards, trombone, guitar, accordion, etc. Alfreda Benge’s simple yet telling lyrics, as always, are the perfect match to Wyatt’s voice, music, and stark arrangements: “When the bombers bomb again, I need your lullaby... Night is long, and sleep’s just a dream.” Notes accompanying many of the songs describe the story behind them, giving more poignant meaning to them, such as the meaning behind “Lullaby for Hamza” above, explaining that during the recent war, “Many children in [Baghdad] were taking valium to calm their fears.” As always, Wyatt manages to evoke that pivotal, somnolent moment of quasi-awareness, when you can’t quite figure out if your warped thoughts are real or dreams. Cuckooland is finding itself noticed in many more circles than anything Wyatt’s done in years due to Rykodisc’s distribution, which is immensely gratifying. It seems that whatever he touches, he manages to make it sparkle, and if anyone can be revered as a solitary presence, it’s Wyatt.

Robert Wyatt’s first release of new songs in eight years is a milestone for the composer. From the outset there is a lyrical optimism overshadowed by his preoccupation with bleak world activities. This wonderful collection of 16 tracks is a sincere, refined statement from a singer who is now familiar with his surroundings both in the studio and around the world. Brian Eno, Phil Manzanera, David Gilmour, and Paul Weller are the usual suspects making notable cameo roles, same as on Wyatt’s last endeavor, Shleep. Sax player Gilad Atzmon is the melodic hub on four pieces, and his fluid style reminds me of Mel Collins’ quality work on many a Camel and Crimson album. The centerpiece on the disc is entitled “Forest” where Eno’s vocal carries the backing verse while Gilmour’s subtle slide guitar glides across a queasy backdrop. An endearing solo piano piece, “Raining in My Heart,” leads into the most disturbing track on the disc, “Lullaby for Hamza,” an ode to a newborn on the eve of the first bombings on Baghdad – a sobering image indeed. Half the disc is designated as ”Neither Here...” that is separated by a thirty-second track entitled “Silence” (simulating the end of side one on vinyl before part two “...Nor There.” Overall it’s a masterful collaboration for Hannibal’s most revered artist. Highly recommended and on my top of the list for 2003.

Henry Cow - The Road: Volumes 1-5 – Even after 40 years it’s difficult to use the past tense when it comes to the work of Henry Cow. Its importance grows and influence continues to be felt. And while it’s absurd to add that “it...  (2010) » Read more

David Parsons - Earthlight & Jyoti – Parsons is a New Zealand based composer with fifteen or so releases to his credit going all the way back to the early 80s; his work tends to draw its inspiration from his extensive travels throughout...  (2010) » Read more