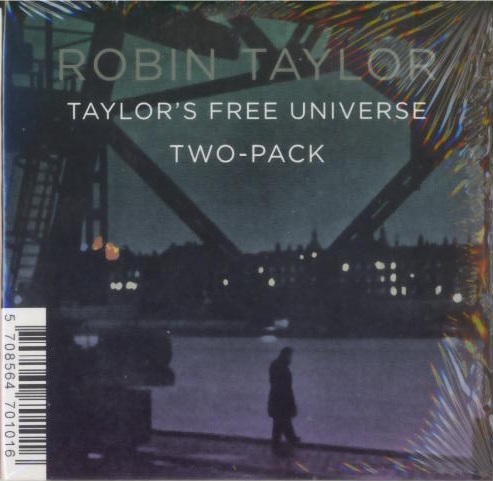 A brilliant marketing strategy here - two 3-inch mini-CDs in cardboard sleeves are shrink-wrapped back-to-back. The first features three new songs recorded in 2010, featuring Taylor on guitars, bass, keyboards, and percussion, drummer Klaus Thrane, and guests on soprano and tenor sax. Kicking off with an explosive flurry of freewheeling saxes, organ and guitars, it quickly settles into a more familiar progressive rock mode with "Heavy Friends," a piece vaguely reminiscent of Pekka Pohjola's "No Way Out" (from Everyman) but with a lot more jazz intensity and soloing. The voice of Louise Nipper is featured near the end of the second cut "The Ghost of Göran," a more contemplative piece that goes through a number of different sections over its ten minute duration. "Stoned Mushroom" closes the disc nicely in a similar style as the opener though perhaps a bit less frenzied, for a total of about 22 minutes of music. The second disc features two extended twelve-minute workouts by TFU, Taylor's jazz ensemble originally recorded in 2006, featuring Taylor on guitar, regulars Karsten Vogel (saxes) and Pierre Tassone (electric violin), along with bassist Assi Roar and drummer Rasmus Grosell making a mighty formidable rhythm section. Opener "Dark City" flies face first into some wild and blistering interchanges between guitars, sax and violin, while drums and bass pin it all down wonderfully. The second cut "Don't You Miles Me" is especially stunning, with the entire band cutting loose for its duration in some thoroughly funky and satisfying improvisation. Recommended!