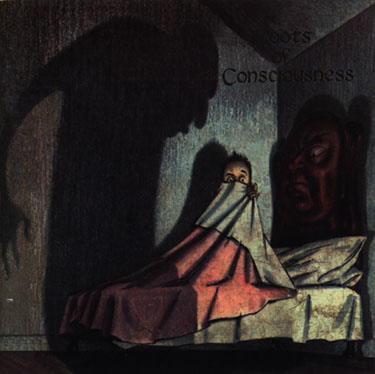 On first listen I wasn't sure what to make of this debut release from Atlanta's Roots of Consciousness, a four piece of guitars, keys, bass and drums, with vocals by all. After a few listens those distorted and grotesque voices, the quirky arrangements and seemingly over-familiar themes from the 70s began to grow on me and provide a window to an inner side of this band that combines an experimental 60s neo-psychedelicism with the hard-rock mystical approach of early-Rush and bands like UFO. These two comparisons work well for a starting point, yet there are other elements in this sound that are not that easy to categorize, some fairly original ideas that juxtapose elements of the simpler 70s hard rock with the progressive elements of the same period. The weird distorted dialog and such may annoy some as being gimmicky, but taken in the spirit of the times the music seems to represent, they are quite appropriate. Tracks like "Remorse," the lengthy four-parter "( )," and "Candelabra" go far to clarify the dark vision that the album overall seems to embrace, both lyrically and musically. "Lethe Wharf," an instrumental that sounds a bit too up-to-date among the album's other tracks, tinkers with dissonance. Topping the album off is the not- intended-to-be-serious track "For Radio Airplay," with it's spoken vocals riddled with bleeped four letter expletives! In all, this is one that fans of the early Rush sound and the more experimental facets of the early 70s might appreciate wholeheartedly.

These guys inhabit that area of progressive rock that tends to make me cringe. Influences? Rush, Marillion, maybe even Be Bop Deluxe. This type ofmusic is more in an "art rock" vein - very vocal oriented (and in that Fish kind of vein), straight song structure, little or no depth of sound, cliched ideas, and when they do tend to broaden themselves instrumentally it seems forced rather than natural. Take "Put You Away," which sounds like an updated version of late seventies/early eighties Rush with annoying "Cygnus X-1" like narration. One thing I do like about some neo progressives is the lushness of some of the music, yet Roots seem to be lacking heavily in this area. A lot of their music reminds me of stuff like the Ventures ("Candelabra") trying to do progressive rock. I suppose this is a more unique approach than the average neo but it still doesn't sound good to my ears. I doubt this will be high on many lists.

Dream Theater - Awake – Over the past few years, Dream Theater has become one of the most talked about bands in several music circles. It's is a band about which most people have a strong opinion. If you like heavy metal...  (1995) » Read more

Steve Baltes / Harald Grosskopf / Axel Manrico Heilhecker - Viermal Drei (4 x 3) – Having been associated with the likes of Ashra and Klaus Schulze, these three guys decided to venture out on their own and see what they could come up with. The result forms a highly successful outing...  (2001) » Read more

Barry Cleveland - Volcano – For this outing, San Francisco Bay Area guitarist Barry Cleveland has enlisted a troop of comrades in his effort to bridge the gulf between western musical idioms and those beyond these shores. Though...  (2005) » Read more

Crown Larks and their noisy "Satrap"