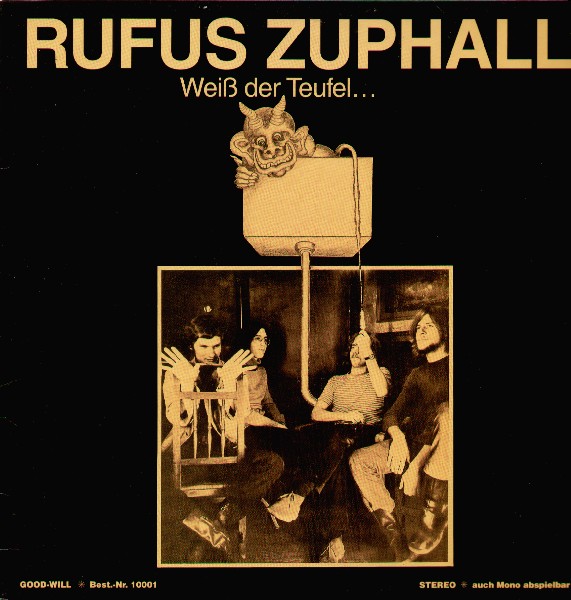 Originally produced in an infinitesimal pressing on the tiny Good Will label, this is one of those releases that gains legendary status not so much because of what's on the album, but because of its rarity. Rufus Zuphall were a German band that recorded in the Netherlands. The only name of the personnel that rings a bell is that of percussionist Udo Dahmen, who much later (almost ten years, in fact) would replace Jan Fride in Kraan. Their music couldn't be more different in style, though. The line-up consists of guitar, bass, flute and drums — no keyboards. Things start off on a tenuous note with "Walpurgisnight," which strangely enough sounds like a multiple cross-pollination of Cream, Jethro Tull, and Soho Orange. The heavy psychedelic air hints mostly at Soho Orange, though. It's loaded with fuzztone guitar and heavy reverb that screams out, "This Is 1969!" Not exactly a promising start, but hang on, it gets better. The second song, "Knight of Third Degree," is a much more acoustic affair, with tablas and flute being the prominent instruments. It reminds of Popol Vuh a bit, but rockier. Then things start getting really good. The other songs are startlingly complex, with fast, exciting flute and guitar runs. It's the flute playing that makes this something other than just another prog/psych album. Klaus Gulden's tireless flute playing makes the all-too-short "Spanferkel" sound surprisingly like early (L'Uomo) Osanna. The only problem with the song, other than its brevity, is that it tends to be a bit repetitious. The seventeen-minute title track contains a good many surprises: an unexpectedly restrained (and short) drum solo right near the beginning, a verse or two (uncredited, apparently) from Gershwin's "Summertime," and a solo in which Gulden goes totally berserk. It almost makes the flute solo in Joy Unlimited's "Sensual Impressions" seem subdued. Also remarkable is the flute solo in "Freitag,", in which Gulden switches to recorder almost imperceptibly one-thrd of the way through, then back to transverse flute for the balance of the solo. The guitar solo is likewise engaging, so distorted with feedback and echo, it becomes almost unrecognizable. This is one of those few albums that mates the progressive and psychedelic successfully. Rarely do they overstep the bounds of good taste with "tunnel reverb" and gratuitous fuzztone, but when they do, it's forgivable (remember the date). There are enough progressive moves to make this album of general interest to fans of prog as well as psych, and as such, is better than I expected.

Eleanor Hovda - Coastal Traces – Hovda is an important, yet little known composer who has been active on the contemporary music scene for over twenty years, mostly through live performances, scores for dance companies (of which...  (1999) » Read more