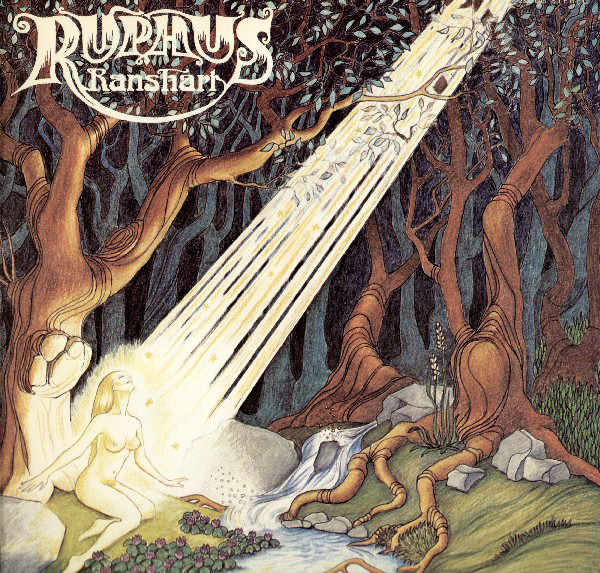 Karisma Records has begun a reissue campaign for the catalog of Norway’s Ruphus, a band formed in 1970 that went through a lot of changes and gained some notoriety in Europe, though they failed to make much of an impact elsewhere. That’s not for lack of quality, however, especially not on these first two albums. On 1973’s New Born Day the band consisted of Asle Nilsen (bass, flute), Hans Petter Danielsen (guitar), Kjell Larsen (guitar, flute), Håkon Graf (keyboards, vibraphone), Thor Bendiksen (drums, percussion), Gudny Aspaas (vocals), and Rune Sundby (vocals, guitar, sax). The shared male / female lead vocals of Aspaas and Sundby are one of the band’s distinctive features, with both singers contributing powerful tones. The music has elements of Deep Purple in the heavy guitar riffs and overdriven organ, and those factors combined with the strong vocals may bring to mind Uriah Heep. The music is progressive in the way that a lot of 70s bands were — not overly symphonic or complex, but a definite step above simple hard rock. The songs have varying sections, sometimes going from a propulsive riff to a delicate passage with acoustic guitar and piano. Much of the music has a detectable relation to the blues, but extended beyond its roots with chromaticism and some jazzy chords. It’s a strong debut with a lot going for it, both vocally and instrumentally.

By the time of their second album, both lead vocalists had departed, along with Danielsen, and new singer Rune Østdahl came on board. When I first saw the song titles, I was a bit worried — “Easy Lovers, Heavy Moaners” does not sound promising, but in spite of the questionable lyrics of the chorus, it’s not a bad song. In general, the music is less based on heavy riffs than on the debut, with more emphasis on keyboard chords and backing vocals. At times I’m reminded of Peter Banks’ Flash, especially since Østdahl’s voice is less gutsy than either Sundby of Aspaas, and also the way Nilsen’s bass figures in the mix. Gone is the Deep Purple resemblance. Side 2 of the original LP starts with “Pictures of a Day,” a nearly nine-minute instrumental piece which starts out with some nice keyboard work from Graf, with layered synths, organ, and Mellotron. Ranshart definitely has a different flavor than New Born Day, but both are worthy, and they set the stage for further changes that were to come for the band.

The Norwegian group Ruphus suffered a drastic lineup shift after their 1973 debut, New Born Day, which resulted in the loss of, among others, both vocalists: Gundy Aspaas and Rune Sundby. New vocalist Rune Østdahl fills their shoes ably, and while Aspaas isn’t credited, her soulful voice is much in evidence on “Easy Lovers, Heavy Moaners” and in the background of a few other tracks. (She would be back full time for the band’s next album, Let Your Light Shine). In spite all the confusion, Ranshart can’t be seen as anything but an improvement on its predecessor. Kjell Larsen, now also doing the work of two, proves that no second guitarist is needed... his nimble-fingered playing is more than enough. Keyboardist Håkon Graf adds Moog and Mellotron to his rig, and uses them with reckless abandon. The result is a far more symphonic sound, based more on instrumental interaction than the vocal melodies that dominated New Born Day. Much to the delight of all, Asle Nilsen continues to double on flute, adding a wonderful contrast in timbre to Larsen’s guitar and Graf’s organ. If the English lyrics aren’t quite up to snuff, at least there’s the instrumental “Pictures of a Day,” certainly the most impressive song on the disc, and probably the band’s finest prog-rocker ever. Ranshart remains a unique album in Ruphus’ output, later albums turning toward a more jazzy sound. Fans of Yes-like prog, prepare for symphonic nirvana.

Renaissance & Illusion - Scheherezade, Turn of the Cards & Madonna Blue – [Note: This review from 1994 refers to reissues on the TRC label. The albums involved have since been legitimately issued, and those releases are listed at the end of this review.] Let's just...  (1994) » Read more

Nick Riff - Cloak of Immortality – Cleveland's Nick Riff should be a familiar name to followers of the neo- psychedelic scene, from his original band The Attitude's 1986 five-song EP, to his earlier releases (Heart of Oblivion...  (1996) » Read more

Imagin'Aria - La Tempesta – La Tempesta opens with a bit of an attitude, with an in-your-face rocker that almost manages to betray their distant past as a metal band while not really being a metal song. Forming in the 80s...  (2002) » Read more

Circa - Live – Billy Sherwood’s plan to get some kind of Yes-related project into play resulted in this DVD from one of the band’s first performances. On board are Yes stalwarts keyboardist Tony Kaye and...  (2008) » Read more

Present - Live! – On again, off again, and on again, this mini-tour eventually did occur (with 5uu's David Kerman subbing for the rumored Daniel Denis) and is captured on this fine release. Along with Kerman, is...  (1997) » Read more