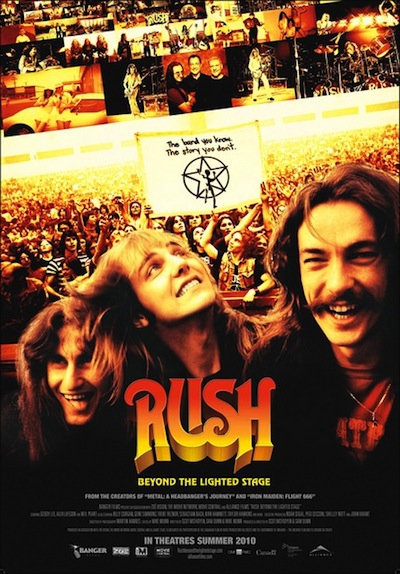 Beyond the Lighted Stage is directors Sam Dunn and Scot McFadyen's look under the hood at the venerable Canadian trio, with the bulk of the content based on personal interviews with guitarist Alex Lifeson, bassist, keyboard player and vocalist Geddy Lee and drummer and lyricist Neil Peart, as well as those who have been along for the ride including producer Terry Brown, manager Ray Daniels and Donna Halper, the WMMS DJ who helped break them into the U.S. But beyond simply recounting how Rush came into existence and tracking their history over the years, Dunn and McFayden have tried to get to the heart of what has kept the band together for so long and what has allowed them to endure in the face of perennial critical disdain. The film reaches its apex when covering the tragic loss of Neil Peart's wife and daughter in 1997. How they — and he — came back from that experience sharpens the focus on the bonds that tie the group together. The commentaries from musicians such as Billy Corgan and Gene Simmons are mildly interesting (while Jack Black and Sebastian Bach are just annoying), but pale next to hearing the band themselves talking about their lives together, at times while revisiting old haunts around the Toronto neighborhoods they grew up in. The second disk contains numerous featurettes, including "Rush Trekkies" (yes, it’s painful), rare footage of the band playing live in 1974 and 1978, discussion about the making of the Hemispheres album, and a hilarious band dinner meeting to top it all off. Whether or not Dunn and McFayden succeeded in explaining what makes Rush tick and why they've hung on for so long is up to the individual. But at a minimum you come away understanding why the guys in "the people's rock band" are something special indeed.

New Trolls - Tempi Dispari & L.I.V.E.N.T. – The New Trolls always only seemed to flirt with the progressive genre, only in the early 70s and then not always consistently. To sum up their career with a mere description doesn't do them...  (1994) » Read more