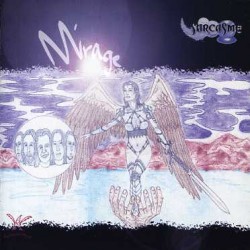 Maybe I'm just a little dense, but I'm not sure how a band that's been around for 12 years can be called young and new, even if this is their first release. That being said, I will admit that the first adjective that popped into my head when I heard this CD was "young." There's some intangible quality to the music that makes me think these are not mature veterans. This five-piece of dual guitars, flute, bass and drums makes me think of a French take on Camel, with some flavors of one of the less dramatic French bands (definitely not Ange), though of course lacking keyboards. Like Camel, the music is melodic, has a hint of blues (mostly in the guitar solos), and is not overly complex (and this Mirage is a fair bit less complex than Camel's Mirage). As such, it's pleasant enough to listen to, but doesn't ever really grab me. Most of the time, it's the bass work that stands out, executing busy fills between phrases and keeping things interesting while the guitars play chords. As I mentioned, the guitars solos tend to the bluesy side, often with a Knopfler-like clean tone, and even featuring a talk-box for an extended period on one track. The vocals are on the low-key side, never forceful or gruff, and are harmonized nicely. So I will retreat to one of the reviewer's stock assessments: this band shows much promise for the future, even if this release is not outstanding.