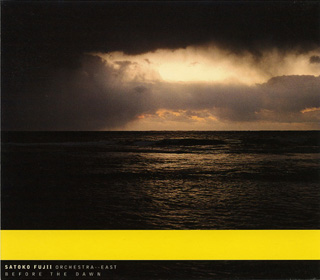 Reviewing this CD for a magazine like Exposé is a bit of a challenge. On the one hand, it could be described as modern big-band jazz, and is certainly being marketed (if the term marketing can be applied to such a release) that way. Pianist Fujii’s Orchestra can be seen as fitting into the history of large jazz ensembles, looking forward to undreamed possibilities rather than back at the traditional roots of the form. But as a listener coming at it from a primarily rock background, Before the Dawn appears in another guise, as the logical extension of the spirit of Soft Machine’s Third applied to a larger number of musicians, with a fair amount of improvisation, an appreciation for a good groove, one foot in rock and the other in jazz. Working with a palette of five saxes, four trumpets, three trombones, bass, drums, and her own piano, Fujii manages the impressive task of balancing composition with improvisation, so the listener could almost believe that these fifteen players are all improvising, and just happen upon the same tonalities and rhythms by coincidence and knowing each other so well. The tempos range from floating freedom to fast intensity, and a solid rocking beat is as likely as a hyperactive bebop swing. The lengthy tracks were recorded live, and are more like suites than extensions of smaller pieces: the sections vary widely in style and refuse any simple structure.