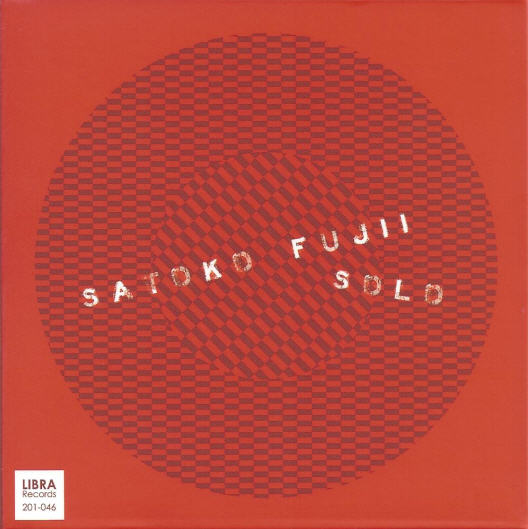 So 2018 is the year that Satoko Fujii turns 60 years old (although not until October 9th) and to celebrate, she will be releasing one album every month of the year, which will include releases by her many varied ensembles. To launch the series, she has released Solo, a not-so-fancy title but more a description of what this is – seven solo piano pieces, six originals and one interpretation. The pieces were all recorded at a single afternoon piano recital on July 9th, 2017 at Yumemikan Hall in Yawatahama, a venue with superb acoustics, and Fujii equipped with the finest Steinway, thus all the subtle nuances of her playing are captured in detail. Opening with “Inori,” a piece she has recorded several times before in solo, duo, and big band settings, the notes just flow from her soul through her hands, all the beauty, colorful imagery, and subtle magical crystalline tones are there. This is a truly uncategorizable fountain of expression, not really jazz, not really classical either, just the pure essence of her 55 years playing the instrument, something that, without any accompaniment, becomes everything she is. The music contains serious moments, flashes of controlled experimentation, elements of humor surfacing from time to time, all encapsulated in a single piece. “Geradeaus” is at its core a pure improvisation, not restricted to conventional techniques; playing the strings inside the piano directly, as well as the body of the piano itself percussively, mixed with more conventional playing, the piece just grows and expands into a wild bouquet of beautiful sounds as it goes forward over its near-ten minute duration. “Gen Himmel” is here, another piece she has recorded several times before in several settings, including on the 2013 album of the same name, where it was a mere three minutes, but here the piece is expanded to almost eleven minutes duration, exploring many new horizons along the way. With “Ninepin,” a tune previously on her 2004 Live in Japan album, she uses prepared piano techniques and string bowing to evoke the sounds of Indian classical music, Javanese gamelan, and other unique sounds, along with more conventional techniques to push the boundaries of the piece out in numerous directions. “Sping Storm” is here as well, which was last heard solo on her 2016 Invisible Hand release, and the set closes nicely with an interpretation of Jimmy Guiffre’s “Moonlight,” which she makes her own. Throughout, Fujii, with much feeling and emotion at many levels, makes the case that she doesn’t just play the piano, she truly is the piano.

Volapük - Le Feu du Tigre (Tiger Fire) – Guigou Chenevier was the drummer and a founding member of that wild and crazy French trio Etron Fou Leloublan, who released six albums between '76 and '86. Volapük is his latest band, a...  (1996) » Read more