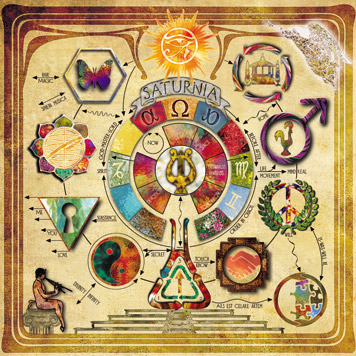 This two-album set is Portuguese musician Luis Simões’ unabashed love letter to classic British psych. Think Syd-era Pink Floyd, Steve Hillage, early Gong, etc. Even the recording style harkens back to those bygone days of 4-track recordings saturated in enough echo to drown a whale. Simões has obviously spent many hours curled up with all those great albums of the late 60s and has done a fantastic job re-creating the sounds and vibe of the era. For some this might seem overly nostalgic and reverential, but I have a feeling there’s always an audience for this stuff just like there’s always an audience for 70s-era Berlin school EM. About half of the songs feature Simões trippy vocals set to a backing of period-sounding instruments including guitars, sitar, organ, Mellotron, analog synths, flute, and a variety of percussion. In all cases Simões acquits himself well. The arrangements range from throbbing, synth-fueled space odysseys to sun-drenched, flute-driven pastoral escapes to liquid, glissando accented tribal rituals. A modern edge even creeps in at times, like the rhythmic drive to “Arcadian Watcher” which nods to RMI, or the swirling menace of “Trance Dance” that evokes early Porcupine Tree. And the kind of programmable synths heard on “Specialists of the Invisible” would have been science fiction to musicians of the 60s. Song titles like “Obsidian Spiral” and “Grand Lodge of Forever” aptly describe the bubbling and swirling excursions within, and all are given plenty of room to explore and expand (the longest clocks in at over 13 minutes). At times the reference points are easy to spot, but it’s not like there’s lots of bands covering this stuff these days so the listener is forgiven for slapping on headphones and visiting the astral plane for a while. Say hi to Daevid Allen while you’re there!