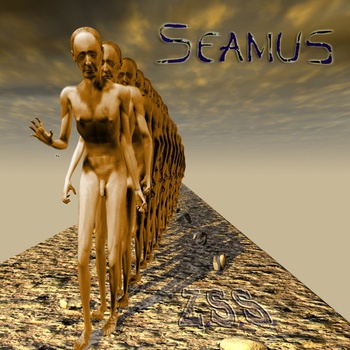 Seamus is a French/English band that takes on the monumental task of portraying the horror of the Holocaust. The music is very intense, even abstract at times, as Seamus tries to convey the anguished atmosphere of separating families, deporting them on trains to destinations unknown, and ultimately their mass murder. But that is as far as it goes. ZSS is an ambitious undertaking and probably not a topic with broad appeal. Either you are appalled by its inhumanity or you are a revisionist denying the Holocaust ever happened. In either case you are hardly interested in listening to a musical adaptation in your car or on your home stereo. Taking the Holocaust out of the equation Seamus' music reminds me of Present and Universe Zero in their approach to odd time signatures, dissonance, and difficult listening. On "Y" the piano solo reminds me of Keith Jarrett's harsher moments. Then there is the cheesy cover art of the oddly rendered line of naked males (or are they aliens?). Actual photos would have been in bad taste, but they could have done a better job with the art. In summary, ZSS is a strange release and one that I probably won't listen to very often even though I do like harsh experimental music.

Asia - Phoenix – When Asia’s debut hit turntables in 1982 it quickly became clear that this was not the next coming of progressive rock many had hoped for. The names were familiar: John Wetton, Geoff Downes,...  (2008) » Read more