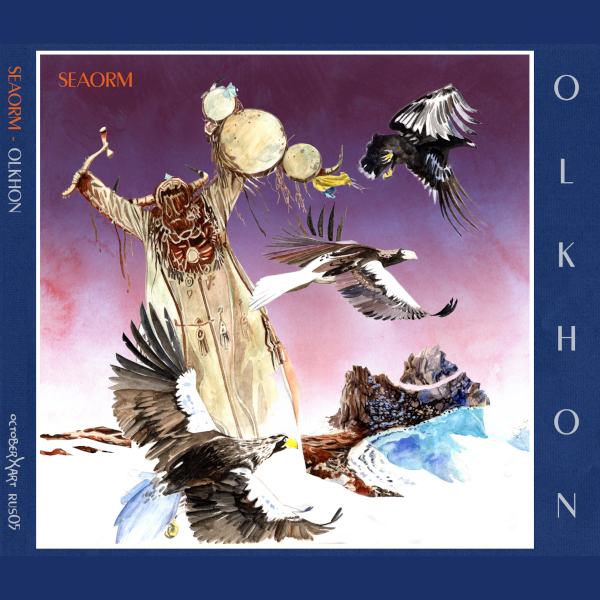 The Sea Orm (Ormria cartamarinae), one of the most terrifying sea monsters in Norse mythology, described in Olaus Magnus's Carta Marina around 1540. And Olkhon is the largest island in Lake Baikal in eastern Siberia. But for our purposes, Seaorm is a collaborative project between Ángel Ontalva (best known as the guitarist and de-facto bandleader of the Spanish progressive band October Equus) and Arkady and Ivan Fedotov, bassist and drummer of the Russian instrumental space-rock band Vespero, although as one third of this collaboration Ark is handling much more than bass guitar, including synths, sampler, and even typewriter! The seeds of Seaorm go back several years to the 2018 studio album by Angel Ontalva and Vespero album Carta Marina (which included a track called “Sea Orm” as well as other fabled sea monsters) and the concurrent live Sea Orm Liventure album, and in 2019 the studio album Sada, and the 2020 follow-up Live at the Astrakhan State Theatre of Opera and Ballet, but mind you the aforementioned releases were collaborations between Ontalva and the full Vespero band, which features from five to six members, also including violin, keyboards, guitar, and piano. The leaner trio project at hand bears the essence of those earlier collaborations, though here on Olkhon, Ontalva is the composer of all nine of the album’s tracks, and again, a purely instrumental endeavor. From the opening cut “Lusud Khan” we hear the similarities as well as the differences — the space rock roots still abound, but allow a bit more room for Ontalva’s guitar, a bit more of a jazz sound present in the mix of ideas on the album’s second track, “Walking on Water,” and on both cuts the synths primarily present subtle psychedelic effects. As a rhythm section, Ark and Ivan are a solid and very adaptable unit, touching on some styles that they probably couldn’t have done with the whole Vespero band in tow, and Ontalva is free to create more subtle guitar excursions, as on the seven minute “Ice Circles,” the album’s longest cut, or “Kiss of Betrayal” which finds a deep jazz groove that gives the guitarist plenty of room to shine brightly. The two minute “Angara” is an electric guitar solo piece by Ontalva, backed only by Ark’s synth effects. Album closer “Shaman Rock” again finds an overtly psychedelic jazz groove as a trippy backdrop for Ontalva’s six-string creations. Olkhon is not Vespero, nor is it October Equus, but something entirely new that should please fans of either band.