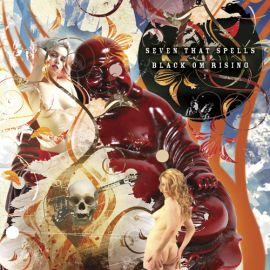 Seven That Spells is based in Zagreb, Croatia churning out some of the best mind numbing kaleidoscopic space music this side of the cosmos. Black Om Rising is their fifth release since 2003. Each CD has a different lineup, the only constant being Niko Potočnjak (guitar and keyboards). They also have an obsession with naked women and Buddha as evidenced in the artwork for each release. Black Om Rising is unusual in that is in a combination CD and DVD. The CD side contains eight songs ("Fluxion," "RA," "LO I," "LO II," "LO III," "Black Om Rising," "Daktari," and "Tearjerker") and the DVD features live videos of "Fluxion," "Lo," "Tearjerker," "Black Om Rising," and "Daktari" recorded at KSET in Zagreb in October 2006. For this incarnation, the band members were Narantxa (bass), Lovra Zlopaša (saxophone), Bruno Matik (drums), and Niko. Their music is loud, intense, and brutal combining punk and Krautrock into one savage swirling mass. Besides Niko’s synth playing, Lovra’s sax on songs like "RA" and "LO III" alternates between being wild and soaring, making this band stand apart from their contemporaries and draws comparisons to Hawkwind. Seven That Spells' music is structured and not near as chaotic as Acid Mothers Temple, who they toured with in 2008, or Green Milk from the Planet Orange. Seven That Spells is a prolific band, Black Om Rising was only released in June 2008, and they have released two more CDs since then. They are a band to watch.