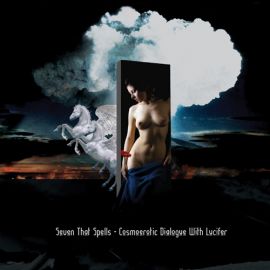 Is it a dialogue or one-way harangue? That's what you might ask emerging from this full-bore psychedelic freak-out of ferocious proto-metal fighting to stay alive (or conscious) against some unspeakable chemical, demonic, or sexual attack. There are roots of Aquarian-age heaviness (Hendrix, Deep Purple, Iron Butterfly) in the garage-y, acid-drenched guitar riffs of Kawabata Makoto (right channel) and Niko Potocnjak (left channel), sometimes driving the jams along, usually vanishing beneath tangled waves of screaming, flailing, processed guitars and synth. Tvrtko Dujmovic (bass) and Bruno Motik (drummer on four of these six tracks) might provide an armature to the mayhem, but mostly they're a roiling low-end clutter in the mix. Things get interesting when Seven That Spells pulls back the volume and tempo. Between the 10- and 14-minute marks of "Stara Planina (Slight Return)," the chaos vanishes into late-night guitars gently reprising the opening theme, swirling cymbals, and the high, wordless singing of Lidija Dokuzovic. "Cookies & Milk/Breakfast with Azrael" achieves textural spaces between high-density blasts with a distant vocal melody and almost-pastoral organ from Potocnjak. "Torture Vessel from the Triangle World" features drummer Milan Bukejlovic, whose extensive use of cymbals gives the divine/infernal madness a lighter touch, opening more sonic space for a sax meltdown from Lovro Zlopasa against occasional guitar stabs. The slow buildup of this final track makes it the easiest ride on the CD, allowing for greater appreciation of these wild musical elements – instead of just hanging on for dear life.