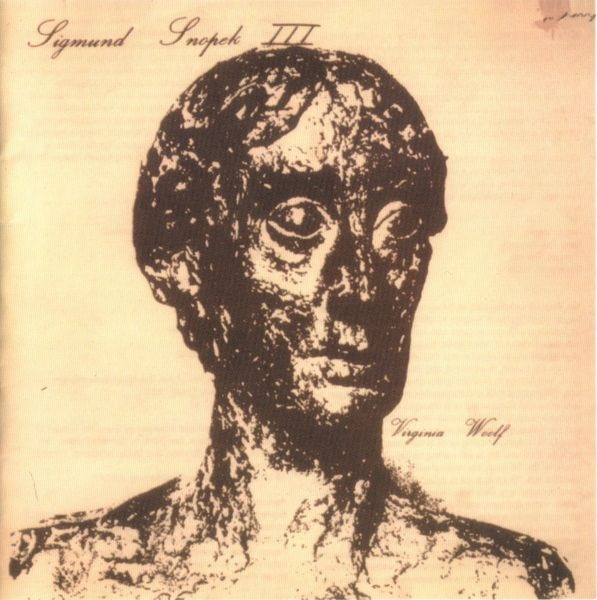 Well, leave it to Peter Wustmann of WMMS to unearth something so totally obscure and unclassifiable that time had nearly forgotten about it. Sigmund Snopek III and the Bloomsbury People existed in the early seventies in and around Milwaukee, Wisconsin. Virginia Woolf was one of several equally obscure albums released by this assemblage, a bizarre yet compelling mixture of progressive rock, classical, pop, jazz, psych, beat poetry, and general avant-garde weirdness. The music here, to my untrained ears, sounds a bit older than it really is, as if from around '68, give or take a year. The basic band is a six-piece, led by Snopek on keys, electronics and backing vocals. Lead vocalist James Gorton doubles on 12 string guitar, and reminds me regularly of Jim Morrison in his mellower moments. The balance of the band features electric and acoustic guitars, bass, drums, and percussion. Additional musicians are brought in on saxes, flute, more guitars, and violins. The string arrangements and the way they are used tend to give the music the 'Left Banke' treatment (if you don't know what I'm talking about, go listen to the LB hit "Walk Away Renee" from the 60s). Overall execution gets a little sloppy at times, but overall the playing is tight when it needs to be. Of course, being an independent production from the early 70s, the recording quality is not so great, but par for the time. If this isn't enough, a couple bonus tracks have been added, including a seventeen minute piece "Lifencave Book Two," recorded in '73, mixing sound effects, VCS3 synth and Mellotron with harmonized group recitations of four pieces of poetry. Also included is a twelve minute version of "Orange/Blue" (second and third tracks on the original album), sans vocals, recorded in 1987. What? That's right, apparently these guys are still together and playing (although only Snopek and drummer Michael Lorenz remain from the original lineup). Despite its age or perceived age, this music is surprisingly captivating. I was a bit put off by the first couple listens, but after a couple of these tunes snuck into my subconscious and followed me around for a few days, I had to give it another chance. Glad I did. Probably not for everyone, though.

Horslips - Roll Back – It was a sad day in 1980 when I read in Melody Maker that Horslips were calling it a day. The premier Irish folk-rock band had survived a decade without a single personnel change, gone through...  (2008) » Read more

Blackberries Want to "Light a Fire"