Simon Mayor and the Mandolinquents — Dance of the Comedians
(Acoustic Music CDACS 056, 2007, CD) 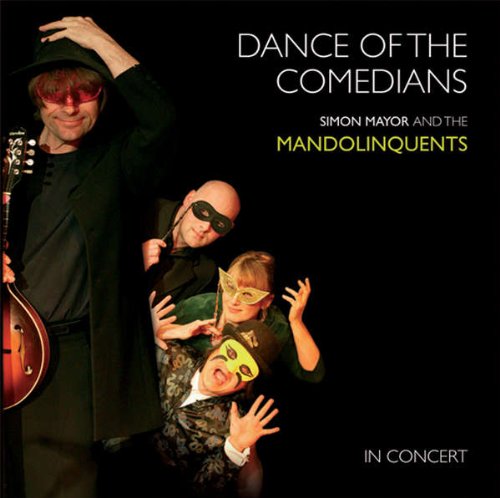 The Mandolinquents are an acoustic, mandolin based (how did you guess?) quartet that’s been playing together off and on for a dozen years or more, and this – documenting one of their live shows in the UK from 2007 – is an excellent point of introduction. Led by Simon Mayor (mandolin, violin, guitar), the group also features Hillary James (mandobass and occasional vocals), Gerald Garcia (classical guitar), and Richard Collins (mandolin, banjo, mandobass); each of the four have respective solo careers, CD releases and other musical endeavors, which probably goes far to explain why this is only their second group release in ten years. They play an eclectic mixture of classical arrangements, traditionals, folk tunes, originals by the various band members, and even a couple jazz numbers, all laced with a healthy dose of musical humor, with comedic banter between the songs to keep things on the fun side (the comedy bits have their own track indexes, so party poopers can program them out if they so wish). These are outstanding players all, and they switch their instrumentation around enough to keep things interesting; they approach the material with consummate professionalism, but never take themselves too seriously. James’ vocals on the four or five cuts she sings on are absolutely delightful, and go far toward making this an enjoyable set from start to finish. A solid recommendation for fans of acoustic string ensemble work.