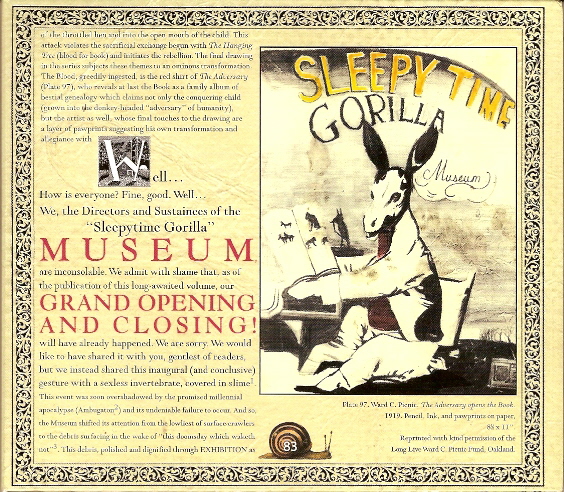 The grand opening and closing of the Sleepytime Gorilla Museum is an event one would hope they would repeat ad infinitum. First there was Idiot Flesh and, somewhere in between, Charming Hostess, two of the bay area's most important and drastically innovative musical projects. Members Nils Frykdahl and Dan Rathbun hail from both, with Carla Kihlstedt from Charming Hostess, and they are joined by percussionist Moe! Staiano and David Shamrock on drums (and after midway through the album Shamrock moves to Thinking Plague, replaced by Species Being virtuoso Frank Grau, who appears on one track here). Sleepytime Gorilla Musem create one of the most incredibly vital avant-rock styles of today, a fusion of influences from hardcore to the experimental. The Frykdahl penned tracks are the most in-your-face, such as the powerful, declamatory "Sleep is Wrong," a numbingly heavy opener with bludgeoning beat and wonderfully avant guitar and violin melody. "Powerless" is similar, but more menacing and intense. It is tribute to the Museum's great talent that they can fuse this punkish angst with such blatantly experimental tendencies so successfully. And, of course, there is "1997," and if it doesn't kick your ass all over the place, you're probably dead. In between the Frykdahl tracks, there are a number of widely varying pieces, from the bizarre, highly avant-garde "Ablutions," to the lovely "Miniature," a piece that reminds me a lot of the acoustic instrumentals of live Deus ex Machina. Albums rarely get more interesting than this. Don't be caught sleeping!

It sounds cheesy to admit but the cover art for this CD is what I thought most impressive about it. Independent releases are usually fraught with problems in presentation. But SGM come at you with a fully realized, professional package, with a story / concept that is either utter nonsense, or merely unbelievable. Nay, just what this band's intentions are is a mystery to me. But anyway it's a great package and helps to define their character. Their sound is made up of nearly equal parts of sludgy Crimsoid riffertronics (delivered with hardly more delicacy than a death metal band), and on the other hand a daring side whose dual voices and tricky rhythms that crumble without breaking speak of an Art Bears influence. It isn't too far away from American RIO-ers like the 5uu's. Having said that, there is very little other than the humor that would expose SGM as an American group. Often in the case of experimental projects, the chimera of technology is too great to resist, but SGM seem to have accomplished it mainly by virtue of hands on instruments, rather than knobs and buttons. How they pull this off live must be something to see. Keep it up and they could possibly join Cuneiform's roster in the near future.

After two years of playing astounding shows in the Bay Area and with a national tour under their belt, this band finally has an album out! Sleepytime Gorilla Museum is a Bay Area supergroup of sorts. Bassist Dan Rathbun and guitarist / vocalist Nils Frykdahl emerged from the ashes of Idiot Flesh and joined forces with fellow Charming Hostess bandmate and violinist Carla Kihlstedt, Moe!kestra percussionist extraordinaire Moe! Staiano, original drummer David Shamrock, and current drummer Frank Grau of Species Being. The band plays and writes with an amazing intensity and passion. At times, they are all-out headbanging — especially during the crowd favorite "1997." At other times, the music is so sparse it almost seems at a standstill. Parts of "Ablutions" and the closing song "Sunflower" could definitely be called minimalist. It's rock music, but with some unusual sonic twists. A distinctive aspect to the band's sound is their use of several homemade instruments, including a piano-string bass, a percussion guitar, and a massive arsenal of unusual percussion instruments. The band creates a unique sound that comes not just from using these interesting instruments, but also from writing and performing really interesting and truly original material. Frykdahl's low growling voice is a stark contrast to Kihlstedt's soprano tone. But... somehow they sound natural singing together. The recording quality of the CD is simply excellent too. For an album that's been a long time coming, it is definitely worth the wait. This is absolutely one of the best albums of the year and comes with my highest recommendation.

Dungen - Skit i Alt – Dungen is a four-piece band of guitar, bass and drums together with composer Gustav Ejstes, a keyboard player who also plays flute and guitar. He sings in a nice nasal tenor style much like Porcupine...  (2011) » Read more

Rush - Replay x3 – Rush fans have been salivating for these early concert videos to see the light of day in DVD format for ages, so to have all three in one collection is manna from heaven. Other than a few promos, the...  (2007) » Read more

Mastermind - III - Tragic Symphony – Mastermind's third album is the first to see release on a major label. Mastermind are Bill and Rich Berends (brothers from New Jersey) who continue on in Volume III much as they did with the first...  (1995) » Read more

Silver Apples - Decatur – Could this be the soundtrack for an alien abduction? Last year the Apples bounced back with original leader Simeon after almost 30 years, with a new disc Beacon, an album of songs, some more pop,...  (1998) » Read more