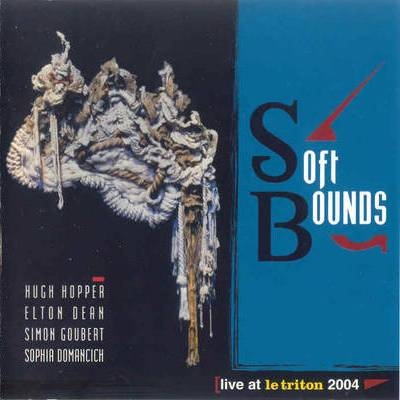 Elton Dean and Hugh Hopper have been involved in so many projects together all it takes is for an alternate rhythm section to assemble under the two musical compatriots and a new project is born. Sophie Domancich had worked with Dean on the Hux recording Avant so it’s not surprising she would be on tap along with recent collaborator Simon Goubert’s excellent drumming. The quartet plow through three new pieces and revive one classic in an hour-long set at the French home for Canterbury ex-patriots, Le Triton. Domancich’s opening piece, “La Part de Anges,” gestates a fiery dialogue between lead instruments to set the tone of the gig. Dean’s new piece, “Gimlet Abides on the Wagon,” portrays a wiry saxello meandering as it develops into an interchange later resolving into a melodic theme. Goubert’s song, “Le Retour d’Emmanuel – Philibert,” opens with Dean’s solo yearnings before diving into the best group playing on the disc, reminding me of Bruford’s Earthworks excursions. Reprising a new incarnation of Hopper’s song “Kings and Queens” from Soft Machine Fourth is a welcome surprise as the Legacy band has also had the same idea on the Live in Zandaam disc. In this incarnation however the piece retains much of its original moodiness under Hopper’s moving bass line with piano doubling Dean’s elegant melody. Domancich’s intuitive piano solo in the midsection makes this performance a must hear for die-hard SM fans.