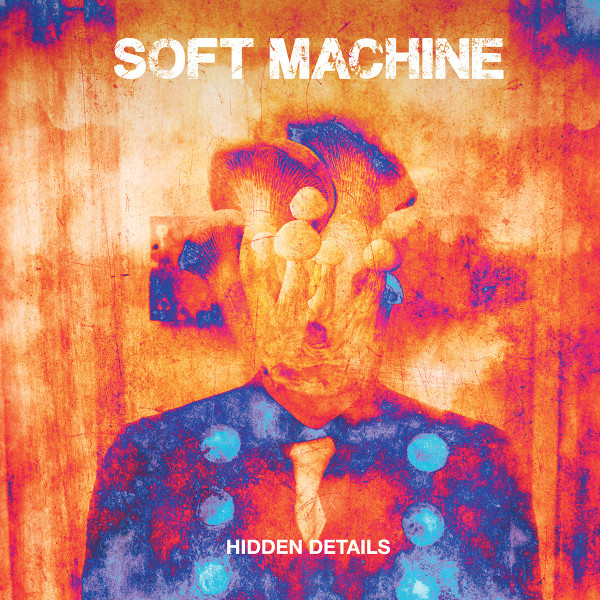 Hardcore fans can argue all they want about whether this is really Soft Machine or not, but it’s kind of a moot point. The Softs went through so many changes in their original run that defining the band even then was a point of contention for some. Musically, the only ones who should have any problem with the attribution of Hidden Details are those curmudgeons who think the real Soft Machine died after Volume Two when they moved away from eccentric psychedelia. From that point onward, it was a jazz-rock band with a fondness for riff-based tunes, odd meters, and a distinctive way of blending composition and improvisation, and this new incarnation is firmly in that tradition. There’s pretty much always been a sax player and keyboards, and sometimes guitar, and to my ear there’s nothing on Hidden Details that couldn’t have also appeared at various spots in the band’s past. “Flight of the Jett” hearkens back to Five, with free-form drumming and spaced-out electric piano. “One Glove” feels a bit like “Hazard Profile” on Bundles. Plus they actually revisit two tunes from the past, “The Man Who Waved at Trains” and “Out-Bloody-Rageous.” Drummer John Marshall needs no validation as a key factor in the band’s history, and Roy Babbington’s performance here is a pointed reminder that Hugh Hopper wasn’t the only great bassist to be in Soft Machine. John Etheridge proves a worthy holder of the on-again-off-again guitar presence in the band. And while Theo Travis is perhaps less edgy and eccentric on the sax than Elton Dean, he steps up and does some of his best playing ever, as well as contributing several great new tunes and adding a flute into the mix. This album is a gem from start to finish, and one of my favorite jazz albums of the year.

From Soft Machine to Soft Ware to Soft Works to Soft Machine Legacy, and now finally back to the band’s original name Soft Machine, the one constant with this band is personnel changes. In fact in their original run from 1967 to 1981, I think every studio album featured someone new coming in or someone leaving, sometimes even mid-album, so there was never a definitive lineup, but three of the members in the current edition of the band have been there since the 70s. More than anything, Soft Machine is, was and always will be a musical concept, a feeling, and an ideal, which is here on Hidden Details in full force. In order of seniority, the current edition of the band features drummer John Marshall and bassist Roy Babbington, who first appeared with the band in 1972 (side two of Fifth), guitarist John Etheridge, who entered the Machine in 1976 with Softs, and last but not least keyboard and woodwind player Theo Travis, who has been with them for about ten years, following the untimely passing of Elton Dean. Like every version of the band before them, this group captures that unique essence that has been Soft Machine from the beginning. Every member contributes compositions to the set, and even former member Mike Ratledge contributes through the band’s interpretations of his original material “Out-Bloody-Rageous” and “The Man Who Waved at Trains” from Third and Bundles respectively. Highlights? Where to start? There are so many, like the spacy group-composed improv “Flight of the Jett” to its follow up, “One Glove,” composed by Etheridge, a gritty rocker that’s remininscent of his days with Darryl Way’s Wolf in parts. The opening title track is Travis’ doing, another power jazz-rocker with some fabuluos sax soloing that gets the wheels turning for all that follows it. “Heart off Guard” is a beatiful acoustic guitar piece, showcasing Etheridge in a completely different light, with a powerful sax solo in the final minute. Travis’ “Life on Bridges” comes out of the gate with a strong melody, after which the other members join in improv style and turn it into a wild ride through crazyland, with some spirited solo trading from Etheridge and Travis until its eight-minute conclusion. There are thirteen cuts here, every one worthy of mention, and the last of them is the Travis / Marshall penned “Breathe,” a beautiful ambient loop piece with a soft touch of percussion that all flows around the listener like a warm blanket on a winter morning. I think that this latest effort meets and exceeds expectations for all the old fans like myself, and if you’ve never heard Soft Machine before (where have you been?) this is certainly a great place to start. Fifty years after their first album, the band has done a great job bringing that essence into the present.

Blow up Hollywood - Fake – I’m sure they intend the band name to be interpreted as a command to attack Hollywood with explosives (sort of like “Kill Your Television”), but I choose to take the other meaning, imagining a...  (2005) » Read more

Coyote Oldman - House Made of Dawn – This duo of flautists, Michael Graham Allen and Barry Stramp, creates a music far beyond that of the acoustic instrument. Processed through a myriad of effects, the tones of the flute create music of...  (2000) » Read more

Satori - Tick – This is one of those albums that seems rather irrelevant in the scheme of things. Not that it's bad, but there are tons of ambient albums even with prominent guitar that are much better. This...  (1996) » Read more