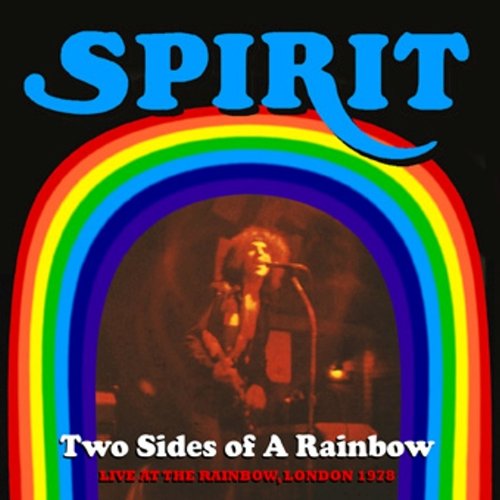 The year was 1978. Spirit was operating as a trio, led by guitarist / singer Randy California, a disciple of Hendrix, and his stepfather Ed Cassidy on drums; rounding out the trio was bassist Larry "Fuzzy" Knight, who also contributed vocals. It had been five years since Spirit toured the UK, where the band was still very popular. There wasn’t a big touring budget, but a short tour – three dates in England and one in Germany, was arranged with the idea of recouping the costs by releasing a live album recorded at the Rainbow Theatre date on March 11. Spirit was the headliner, with Alternative TV second-billed, and opening the show were The Police. A sold out show, a receptive audience, but unfortunately the recording didn’t go so well, with the main guitar channel completely missing, only the phaser and echoplex channel came through. That meant that all the guitar parts had to be re-recorded before the live album could be released – and so they were, with many overdubs. In the end three versions of the live album were released, each with a slightly different track listing: Live, the UK version, included two cuts “Downer” and “Wild Thing” from numerous encores; Live Spirit, the US version, instead had two studio cuts “Rock and Roll Planet” and “These Are Words” with canned applause appended to make them sound live (neither was actually played at the show); the German version Made in Germany had the same cuts as the US version (although presented in a different running order), with the addition of the five-minute “Rockpalast Jam” recorded in Essen for the Rockpalast TV show. (Incidentally, that entire show was eventually released on CD as Rockpalast: West Coast Legends Vol. 3 in 2010). In England, a single was released of the live version of “Nature's Way,” with the non-LP “Stone Free” on its b-side. To date, only Made in Germany was ever released on CD, and it went out of print before most folks could find a copy.

So what does all that have to do with this? Some three decades later, cassette tapes of the board mix for the complete rainbow show turned up, with all the of the guitar parts intact, exactly what the audience heard that night, including many cuts that were never released (“Mr. Skin,” “Like a Rolling Stone,” “Love Charged,” and “Turn to the Right” among them). The downside is that these tapes were in bad shape and needed extensive clean-up before they could be considered suitable for release; even as presented there is still audible tape hiss and compression. So what we have on Two Sides of a Rainbow is the complete show (all of disc one) with encores (first 35 minutes of disc two), taken from those board tapes, followed by a remastered version of Live Spirit – the US release. Which takes both discs up to around 79 minutes; it would have been nice to have the two additional tracks from the UK release, and the single b-side, but there just wasn’t any room remaining on the two discs. What this set boldly illustrates more than anything is the extensive amount of rework that was done on the original live tapes to create the 1978 live albums.