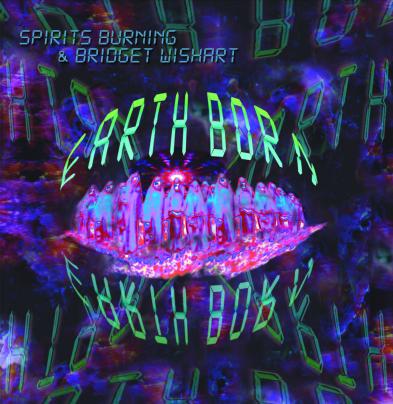 Some may remember Wishart from her brief tenure as a member of Hawkwind in the early 90s (she was featured on the Space Bandits studio album, and the live Palace Springs and Live at Nottingham 1990 two-disc set); I believe it’s the only time that Hawkwind has featured a female singer, at least on recordings. On Earth Born, she joins the Spirits Burning crew (which includes mainstays Don Falcone and Daevid Allen, as well as Hawkwind alums Simon House, Richard Chadwick, and Alan Davey, among literally dozens of other contributors) offering vocals, lyrics and some melodies. For this outing, Spirits Burning seems a far more song-oriented and compositionally structured entity, even embracing touches of folk and pop here and there, than their more usual freewheeling jammy space-rock tribal sound, although the arrangements still involve many of those sonic trappings, which keeps the disc engaging from beginning to end. Wishart’s child-like, frequently treated vocals and space whispers may be a make-or-break for some listeners, but in the context or this musical setting, it suits it perfectly. Since the whole Spirits Burning concept is that of a studio project of long distance collaborations, the chance of a live performance of this is next to nil; still, it would be great to see some of this material performed live. Hopefully this SB-Wishart joint project is not a one-off; I would certainly like to hear more from where this came from.