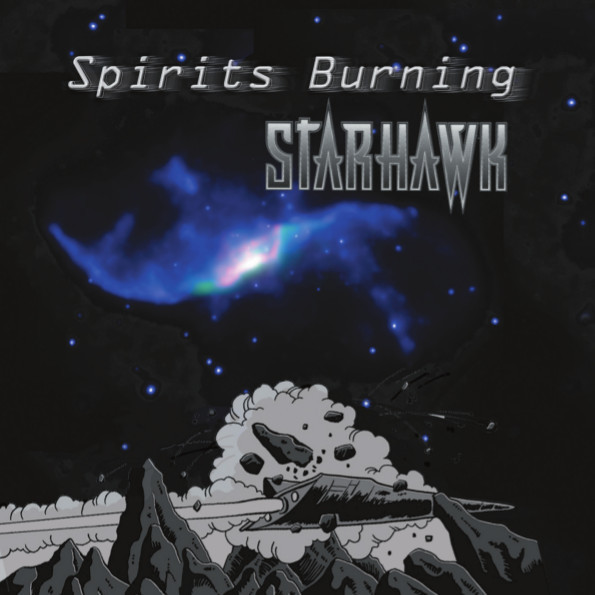 On this latest offering by Spirits Burning there are nearly fifty musicians, vocalists, and writers involved in the proceedings, most only on a track or a few but that’s still a lot of talent from across the field of years of progressive and space rock and related genres. I could start listing the players and what they play and what bands they are from here, but I’m sure most will be known to many or most readers and I’m certain that detailed information is available elsewhere. Head chef Don Falcone will probably not say that’s too many cooks in his kitchen, but each singer and player here brings their own ideas and style to various parts of the overall project in varying combinations, and when all is said and done, Starhawk is quite good, but it does tend to sound somewhat like a various artists compilation CD, with much variance in style and approach from one track to the next across all seventeen cuts. Falcone is involved at one level or another on all of them, either as a collaborative writer of lyrics or music or both, and player of various instruments, mostly synths, keyboards, and electronic percussion, and backing vocals on many cuts. There are numerous representatives of the extended Hawkwind, Gong, and Clearlight contingents as well as other space-rock families involved, so that should give the reader a decent idea of where much of the input here is coming from and in general what might be expected. Arrangements tend to be thick and dense throughout, a wall of space sound, but coming from all over the star-map. There are numerous stand-outs, too numerous to mention every one actually, but “Xara’s Poem” is one of those, a dreamy gothic styled piece with a beautiful lead vocal by Emma MacKenzie, and its follow-on “For Those Who Are Searching” follows a similar vein, with space-whispery lead vocals by Bridget Wishart. “My Life of Voices” is a snarly rocker with some killer lead guitar soloing by Igor Abuldaze, some great keyboards by Falcone, and lead vocals by Kev Ellis. Its follow-on “Let’s All Go Cloud Puffing,” an instrumental, uses a combination of tablas by Larry Thresher and Falcone’s electronic drums to achieve a strong percussive groove, with droney sitar-ish guitars, and lead EWI solo from Bridget Wishart, seemingly like something from the Amon Düül stylistic idiom. All taken, this is a superb album, even if occasionally a bit uneven.

King Crimson - Thrak – While the earlier release Vrooom was essentially a rehearsal of material destined for this album, it was also a far more condensed unit of what would be the most important tracks on the full length...  (1995) » Read more