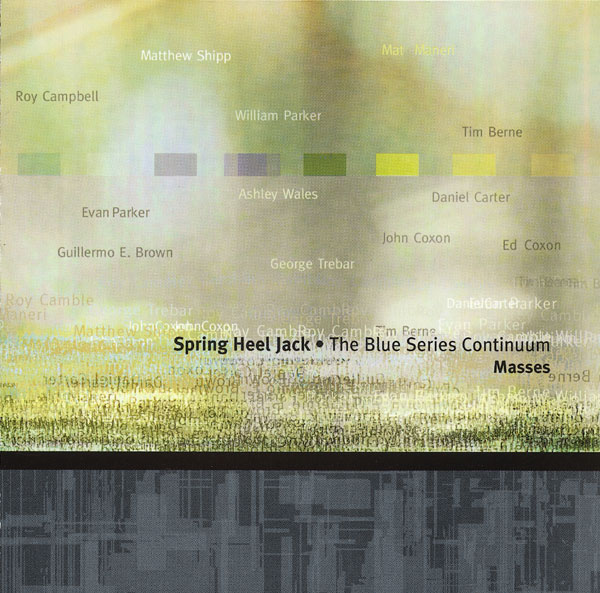 John Coxon and Ashley Wales take advantage of their Thirsty Ear jazzy label mates by diving head first into a maze of grooves, pulse and mood. But don’t expect a clever ambient dub from these blokes, instead there’s a maelstrom in their test-tube like minds on this expedition. The core of the improvisation surrounds Mathew Shipp’s unlikely set of players including William Parker and trumpet player Roy Campbell. But added to the mix are also a few notables from the UK (especially Evan Parker). The album’s opener, “Chorale,” is simply that, a slow-building layering of sound with Shipp providing base for industrial noise to superimpose itself. The most impressive piece out of the ten tracks is “Chiaroscuro,” on which saxophonist Daniel Carter solos over a throbbing bass pulse until complete cacophony descends. The title track is a random conversation between horn and percussion, which deposits the listener into a planned confusion that is both amusing and annoying. “Cross” picks up the tempo, pushed by Guillermo Brown’s driving kit and a blazing passage from violist Mat Maneri; Tim Berne even gets a turn on “Medusa’s Head,” shouldered against Evan Parker’s sonic barrage. In summary, it’s uncommon to hear a marriage between two disparate music scenes trying to find a common pathway. While it may not be as genre-breaking as fusion was in the 70s, hopefully this project has opened a Pandora’s box to potentially create a vague roadmap for further experimental endeavors.

Maxophone - Maxophone – Ah yes, yet another great Italian band. The closest comparison that I can make is with Locanda delle Fate, but that doesn't quite describe Maxophone. While Locanda was a full, rich seven piece that...  (1993) » Read more