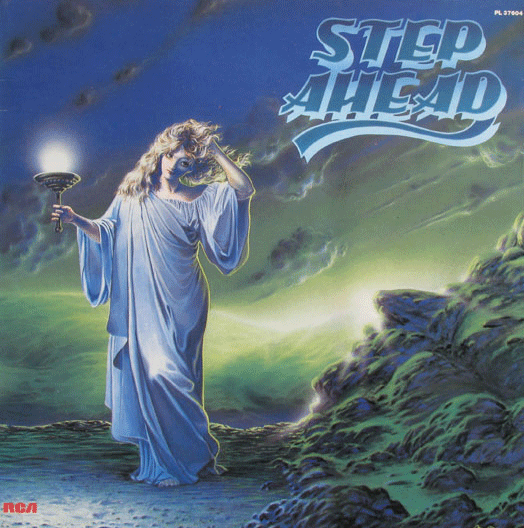 This CD includes Step Ahead’s only album recorded in 1982, three live tracks recorded at the Théâtre de Verdure, Nice, November 1982, and two previously unreleased tracks recorded at Step Ahead's rehearsal studio in 1982. The additional five songs are not of the same technical quality as the rest of the songs. Christian Robin and Musea included them as a document of their musical value for the band’s fans. Christian Robin reworked these tracks at Mr. Potier studio, Metz-Magny, in October 1992 to give them the best sound quality possible under the circumstances. Step Ahead was Christian Robin (electric guitars), Danny Brown (vocals), Gérard Macia (Ovation Adamas acoustic guitar), Claudie Truchi (keyboards, Bösendorfer Imperial grand piano), Antoine Ferrera (bass), Jean-Yves Dufournier (drums), Alain Lejeune (keyboards), Philippe Recht (bass), and Emmanuel Riquier (drums). Together they produced symphonic progressive music along the lines of Yes, FM, and Rick Wakeman. Christian’s voice sounds like Jon Anderson with more body. If you appreciate middle of the road progressive music, Step Ahead is an album to explore.

Step Ahead was one of France's best symphonic bands and this, their only release, was a quite a rarity, not only in availability but also in quality. In the early eighties, few bands kept the progressive flame alive while all too many decided that sounding like Genesis was the best way to appeal to progressive fans. Step Ahead managed to derive a certain amount from Drama era Yes and some others but remains original in composition and atmosphere. Driven by Christain Robin's searing guitar work, the band created and pleasant yet powerful sympho album that deserves a listen by prog-heads and neo-proggers alike. Keyboardist Claudie Truchi plays with a wonderful style - she doesn't just bang chords during guitar solos or vocals lines - instead she plays complex multi-threaded semi-classical lines. Herrhythm playing is fantastic. Perhaps the best since Keith Emerson. Vocalist Danny Brown has a high pitched, strong tenor, and the band is rounded out by a solid rhythm section, capable of making the album worth listening to for the bass and drums alone. This disc contains five extra tracks, two of which are previously unreleased, destined for Step Ahead's second album, which never was finished. These two and the three live tracks are mediocre quality and not worth buying the Musea pressing for if you already have the out-of-print Japanese pressing. However they do add a nice touch for completists. Step Ahead may have been a precursor to the Marillion sound that dominated the mid-eighties, but I maintain that they are the most worthwhile of all bands that adopted that sound. They were original, yet their music contains a familiar flavor, thoughtful lyrics and listenable groove that makes its underlying complexity almost deceptive.

Jean-Luc Chevalier - Km 5 à Bangui – After a fairly long stint with Magma (from Attahk thru the Merci period), Jean-Luc Chevalier has also chosen to pursue the pure jazz avenue recently, much like many other Magma alumni (Vander,...  (1996) » Read more

Tel Basta - Lickerish – I really like this CD. Musically it's very simple. I am reminded of early Cure and Joy Division music. Progressive? Well, not as I call progressive. The promo statement for the band read...  (1996) » Read more