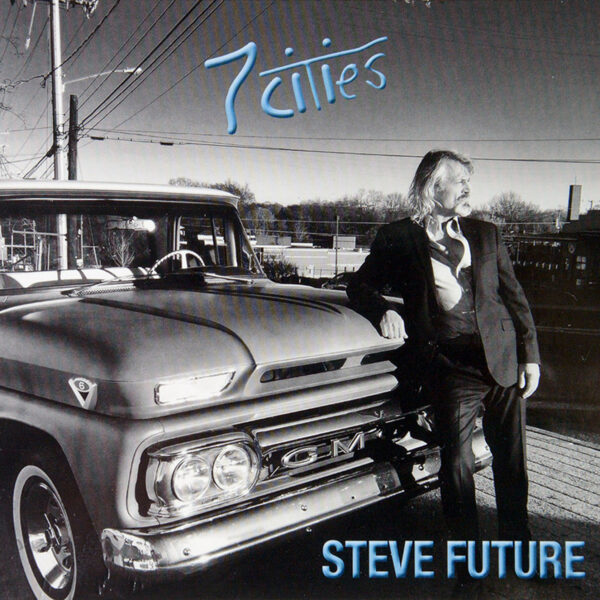 Bror Stefan Pettersson (a.k.a. Steve Future) has been working professionally in his native Sweden for 35 years now; his album First Take was released in 1994, but he was involved in other bands and projects for years prior to that, He is a songwriter, guitarist, singer, and amazing harmonica player, working in what might be called the blues-rock genre, but actually his interests go far beyond that, as this CD will illustrate to any listener with an interest in the wide-ranging scope of roots music. The eighteen tracks on 7 Cities are compiled from three previous EPs, Four Cities (2017), It Takes Time (2017), and The 9 Others (2014), and is his first release available as both a CD and double LP, the title referring to all the different cities where the tracks were recorded: Stockholm, Gőteborg, London, Nashville, Kingston Springs (TN), New Your, New Orleans, and Berlin – hey, wait, that’s eight cities...oh well, Kingston Springs is just up the road from Nashville. The album spans a wealth of styles across many musical genres, basically any sound within which a harmonica is suitable accompaniment is represented here. Take a track like “Railway Layer’s Daughter’s Blues” which is almost like a post-Hot Tuna acoustic Jorma Kaukonen track with great vocals and brilliant blues-harp playing all the way through. “Waterfall” takes a slightly reggae-esque style into acoustic folky territory with some great mandolin playing throughout. Solid blues rock is apparent on many of the tracks throughout the set, one of the standouts certainly has to be “Rat Poison,” with Future’s stylized vocal delivery hitting all the right buttons, with a powerful organ solo to boot, followed by one of the finest harp solos to be found herein. Opener “Bananas and Diamonds” has a curious lyric but delivers a solid rock groove with great backing vocals and several muscular harp and guitar solos. “Civil War” offers a touch of acoustic bluegrass like a collision between the Nitty Gritty Dirt Band circa 1970 and Dan Hicks and his Hot Licks, with some great harp and fiddlin’ throughout, which could also apply to the outstanding “Don’t Mean Nothing.” While I’m a little more fond of the acoustic pieces, the rockers are superb and uniformly tasty as well, and in fact there isn’t a bad cut on here anywhere.