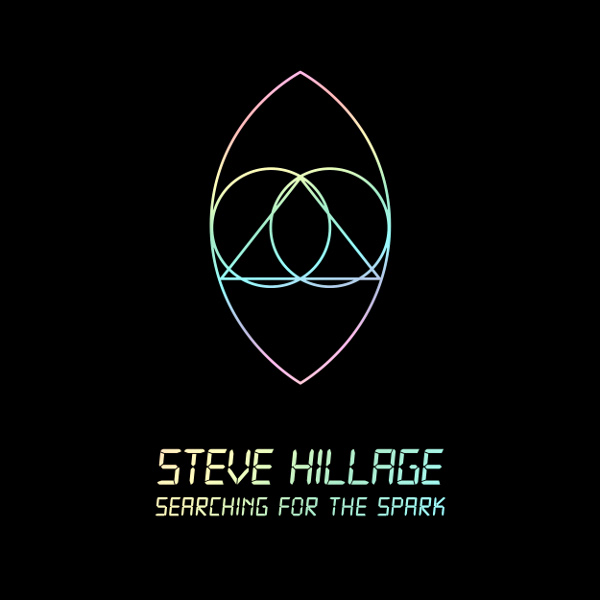 On October 21, 2016 Snapper / Madfish released a mammoth career spanning boxed set of Steve Hillage’s music titled Searching for the Spark. This set highlights Steve’s solo work from his very first recording in 1969 at age 18 through to 1991’s self-titled debut album with System 7. The set includes Steve’s first album Arzachel, Khan’s Space Shanty, Fish Rising, L, Motivation Radio, Green, Open (and Studio Herald), Rainbow Dome Music, Open, For to Next (and its companion And or Not), System 7 (first album), Live in Deeply Dale (1978), two BBC performances from The Paris Theatre recorded in December 1976 and November 1979, eight CDs of previously unreleased music from Steve’s personal archive including four concerts (Brighton Dome November 1977, Munich April 1979, Hammersmith Odeon November 1979, and The Steve Hillage Band Live at the Gong Family Unconvention 2006). There is also a 188-page hardback book documenting Steve’s life, three reproduction promo posters, two lyric books, an enamel badge, a 60-page scrapbook with more photographs and cuttings, and a certificate of authenticity personally signed by Steve Hillage and Miquette Giraudy. Searching for the Spark is a limited edition of 2500 copies. Reviewers were provided with a 38 minute sampler containing seven tracks. So for me, rather than Searching for the Spark it is more like Searching for the Rest of the Music. Of course, a seven track sampler can't provide a true understanding of something this massive. All that I can reasonably do is quote from the press kit and comment on the seven tracks. Since the seven tracks are from the unreleased material, I have no idea of the quality of the studio albums. Were they remixed, enhanced, remastered, etc.? Who knows? If you already own the studio albums, should you invest your hard earned money in this boxed set? I cannot in all good conscience tell you yes or no.

The seven tracks on this abbreviated sampler are: “Aftaglid (Tambura Backing Track Mix)” from the Fish Rising sessions; “Beginning to See the Light” from the Green demo tapes; “Madman's Rap” a Khan Mk II rehearsal tape with Dave Stewart; “The Golden Vibe,” an a cappella echo guitar recording from 1973, a live recording of “The Fire Inside” at the Odeon Hammersmith November 1979, a live recording of “It's All Too Much” from Brighton November 1977, and a live recording of “New Age Synthesis (Unzipping the Zype)” from April 1979. “Aftaglid” has a cleaner sound than my vinyl copy of Fish Rising and the tambura provides more of a trance inducing sound, but overall not much different from the album track. “The Golden Vibe” is basically a sound sketch with echo guitar for “Aftaglid” recorded a year before Fish Rising. These practice tapes are lo fi recordings, so be prepared if you invest in the music. “It’s All Too Much” is an outstanding performance of this George Harrison tune and it far superior to the studio version on L, especially Steve’s dazzling guitar solo. 1979’s “The Fire Inside” documents the demise of 70s prog music and the move towards a more jazz-funk sound. And the final track “New Age Synthesis” hints at Steve’s movement to System 7. The track begins as mostly synthesizers, drum machines, and guitar. Towards the end we are treated to some great glissando and echo guitar riffs. With only being exposed to approximately less than 5% of the music in this set, I wish that I could provide more of an analysis. So buyer beware, it is a shot in the dark for buying this set, unless you are a Steve Hillage enthusiast.