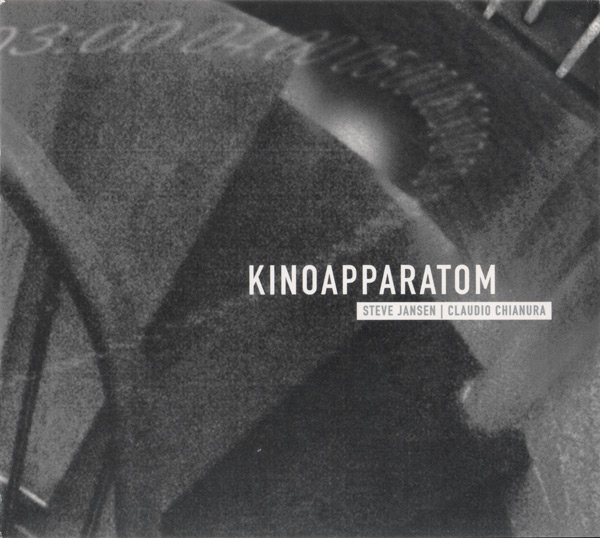 Writing about music is often difficult, trying to find words to describe what is essentially a non-verbal experience. When the music tends toward the ambient realm, this problem is intensified. Former Japan drummer Steve Jansen here collaborates with Italian electronicist Claudio Chianura on music recorded live to accompany a showing of the 1929 silent film The Man with the Movie Camera. This further complicates matters, as I have not seen the film in question, so I won’t speak to the music’s value as accompaniment. Jansen is credited with samples and rhythm loops, many of which do not involve any recognizable instruments. The first track is backed by a loop that sounds like it was taken from an old LP, with quiet crackles and an indistinct thump; the second track takes similar sounds and repeats them more quickly so they almost form a rhythm, then adds a highly treated rhythmic pattern of indeterminable origin. The old-LP crackling sound makes appearances throughout the CD. Roughly twice during the course of the set, a sort of groove develops, generally made up of low-key chaos, once approaching a recognizable bass/guitar/keyboard arrangement. Synthesizers, though used extensively, often sound nothing like synthesizers. Roberto Zorzi’s parse guitar sounds, some made on the strings, some made on other parts of the instrument, make occasional appearances. The mood is marred somewhat by odd vocal noises that stand out on two tracks.

Heart - Little Queen, Dog & Butterfly, Bebe le Strange – Out of the Pacific Northwest, the two rockin' sisters Ann and Nancy Wilson and their band hit American radios in early '76 with "Crazy on You" and "Magic Man," two hits with a sound that combined an...  (2004) » Read more