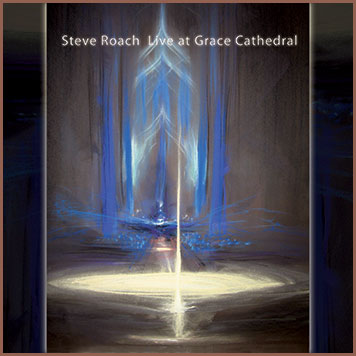 This two disc set documents one of Roach’s rare live performances, this one at San Francisco's historic Grace Cathedral on June 29, 2007. The natural reverb of the performance space meshes well with the two extended pieces, mixed from soundboard and audience, and offers an opportunity for Roach to collaborate with the ambiance of the room's acoustic properties. The first disc is a 43-minute piece titled "Embracing the Space," which takes a similar approach to many of Roach's deep space floating ambient works, quietly growing into the live surroundings, engulfing the listener in a warm blanket of sound built from a multitude of overlapping sonic textures. The real treat here is the second disc, a 73-minute piece appropriately titled "Merging with Grace," where shimmering beams of glistening sound pour out and merge with the natural acoustics, building slowly from nothingness into an ever-expanding immensity that flows to a vast and infinite horizon. The many subtle textures here, sparkling under the surface, opening wider and deeper into the multi-layered spacefolds of subconscious regions, evoke a world of mystery and imagination that brims with warmth and color as the listener is guided through the portals on the way down the spiral to tranquil stillness. This is your ticket.

Ash Ra Tempel - The Best of the Private Tapes – Ash Ra Tempel is one of the core founder bands of the German space rock movement along with Kraftwerk and Tangerine Dream. But the group has suffered from less stateside notoriety than those previous...  (1999) » Read more