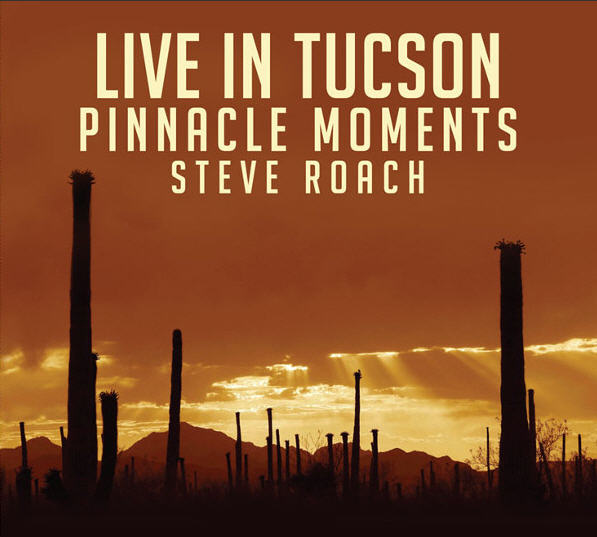 There’s nothing quite like the music of Steve Roach captured in a live setting. One may hear no audible applause, nothing else that might give away the fact that it was recorded live (in this case five selections taken from two nights at Solar Culture’s Galactic Center in February 2015), but the material tends to be a more of a cross-section of his recent work from the given period rather than a single exploration of one particular concept. Across these five long cuts that together come to double-album length, we start in a beautiful atmospheric mode with “The Desert Eternal,” one that harkens back to the artist’s work in the late 80s or early 90s, like an expansive shimmering landscape, its title hinting at the Desert Solitaire period. Morphing gradually into more lush and richly varied textures, some structure in the form of subtle pulsations and gradual shading is adopted when moving on to the second track “Endorphin Dreamtime,” which, along with its 20+ minute follow-on “Going – Gone” – the latter adopting some of the mysterious effected swirling percussive, flute and wind-based sounds recalling the material from Roach’s more recent Alive in The Vortex double disc. Before you know it, you have made the transition into “Skeleton Passage,” which encompasses a variety of the ideas presented on Roach’s recent 2015 studio work Skeleton Keys. This gently morphs into the closing track “Spiral Passage” which is cut from the same cloth but recorded on the previous night, though here the transition is seamless. Like all of Roach’s works, but especially here on “Endorphin” and “Going – Gone,” one never knows exactly how these sounds are being produced, except perhaps for the live audiences who may have witnessed these shows with their eyes open.

Iona - Iona DVD & Live in London DVD – Celtic prog band Iona are back in a big way, not only with their recent studio release, The Circling Hour, but also with two new DVDs. This is a great set both for fans and those new to the band as it...  (2008) » Read more