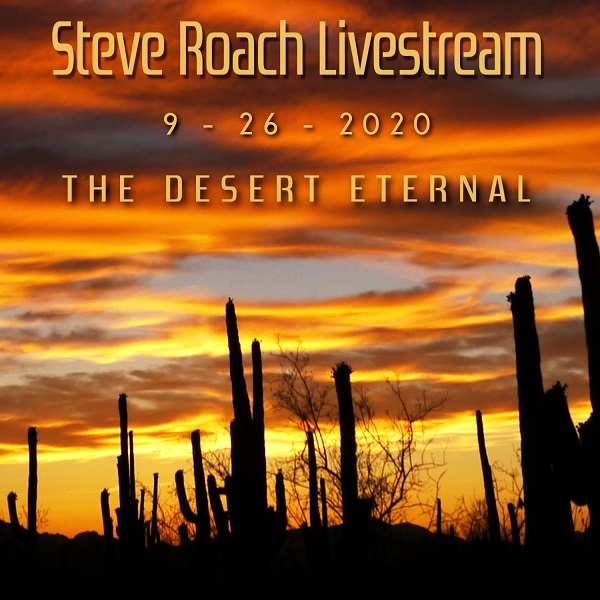 The concert at hand – ten titles totaling well over two hours – is an opportunity to see and hear Steve Roach in his Timeroom studio creating some of the sounds that have mystified listeners for decades. The music presented here consists of the more mysterious and deeper floating ambient soundworlds that he has created over the decades as well as some new (or at least previously unheard by myself) pieces that will surprise any long time listeners to his music; other pieces will hint at things that appeared previously, but throughout the listener will bear witness to Roach’s method of sound sculpting of ambient musical forms – that is to say one won’t encounter any busy sequencer driven pieces here, the most excitement will be when he plays the didgeridoo with some tribal beats on some pieces culled from the Dreamtime Return era, but most will be the meditative style that soothes the soul and calms the spirit. One surprise early on is a ten minute block taken from his 1984 album Structures from Silence (the original studio version was a full half hour, but we won’t worry about that, ten minutes gets the point across majestically), I believe that it’s the first time that the piece has ever been filmed live. In his Timeroom studio, Roach is completely surrounded by keyboards, laptops, and mixing boards, every item set to produce just the right sound at the right time with the magician’s touch, often breathing in slow loops that engulf the listener in the quiet morphing colors of the studio. A 17-minute block of “Mystic Chords” blankets the listener in sonic warmth as the concert continues; there are no breaks between tracks or any introductions to what’s being played, it just morphs along gently from one piece to the next. Open your eyes at any given time and you may see him touching this keyboard or that, triggering some percussive sound or the deep pulses on "Heart of Fire," everything flowing with the overall glacial pace, while he's planning the next move. If you’re like me, two-plus hours in front of a computer screen is a challenge, but playing the full concert over and over all night ioffers an excellent way to recharge your internal battery for the coming day, but whatever suits the your preference – the full concert can be downloaded at a very reasonable cost for a limited time, and the livestream video on Roach’s YouTube channel is available at the link below. To my knowledge there is no plan for a physical release.