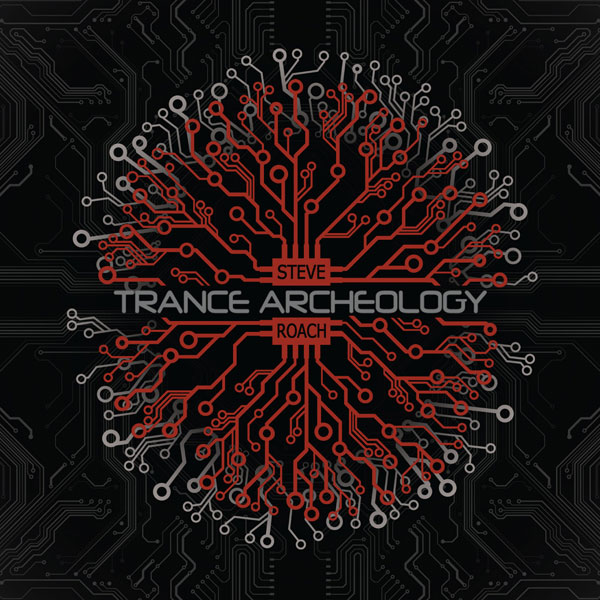 One has to wonder, after so many years and so many releases, how does an artist like Steve Roach come up with new ideas that don’t sound like what he’s done before? Some reference points to past work will be there on each new album but I have to believe that a lot of experimentation goes on between each new body of work to germinate new ideas, textures, and concepts and bring them into a cohesive existence before they are used on any new releases. Such it seems to be with his latest offering, Trance Archeology, a collection of eight pieces of varying lengths that certainly seem at home within his typical ambient soundworld, but feature a number of new sounds and textures, many in the percussive and rhythmic realm that don’t recall any of his previous works, at least those that this reviewer can recall. The side-long opening track “Spawn of Time” features enough new textures and rhythms in its first five minutes to easily support this claim, most created or processed through his modular synths, but often organized rhythmically to vaguely resemble hand drums or such, with other-worldly sounds surrounding the listener like fertile swirling magic on a starlit night, with odd and often twisted sprites of color barreling out of the sky. Eighteen minutes later, after the steady percussive beat has fallen behind clouds of swirling motion, one senses a drop in the volume level and that something new is coming, as the second cut “Indigo Moon” merges seamlessly with it as the opener fades gently away. We are now in a world of shaded stillness that slowly immerses the listener, with a low, slow oscillating pulses supporting colorful bell sounds circling around the psyche. “Trance Genealogy” is another side-long adventure, this time beginning on a foundation of more typically Berlin School electronics, but with more than its share of soaring atmospherics as it progresses onwards. One won’t even notice when the track changes to “Long Shadow,” a mysterious, dreamlike, cavernous mystery that follows on from much of Roach’s more recent work. Deep pulses and of steady rhythm return on “Birthpulse” and are futher elaborated on “Firebreather” before mixing it up with a new wealth of electronics on “Unearthed.” Hardly a minute goes by anywhere where the foundational sounds aren’t constantly morphing, growing, and shifting as we go. Twelve minute closer “Soul Archeology” forms seamlessly from the previous cut, with subtly shaded sonic events peppering an expansive tranquil sonic panorama. There are plenty new explorations in Trance Archeology, but it remains unmistakably the pioneering work of Steve Roach.