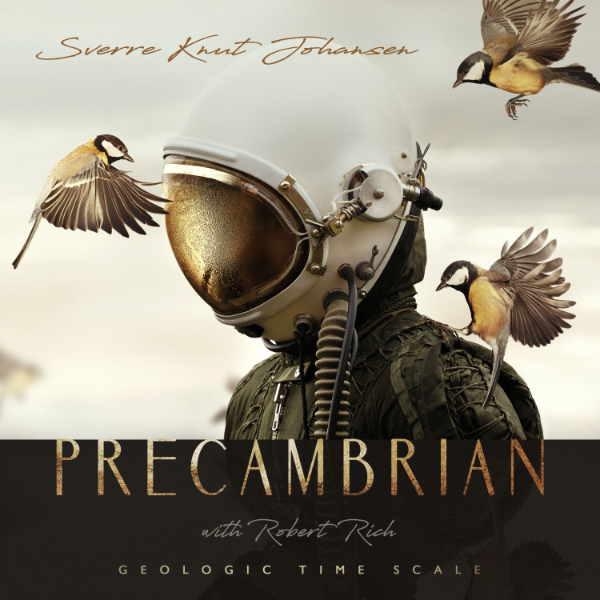 What the Norwegian composer and synthesist has created here could be summed up as an instrumental representation of planet Earth’s history in roughly 62 minutes. Precambrian is Johansen’s fourth release on Spotted Peccary, and quite possibly his best to date. Although the earlier ones were quite enjoyable, this one probably best integrates the concept into the music. Johansen plays synthesizer, percussion, software instrumentation, field recordings (water, birds, flute samples, guitar samples and a wealth of other things), while Robert Rich is on board adding piano, prepared piano, gliss guitar, Haken continuum, and other sounds. David Helpling adds guitar textures on a couple tracks, and the whole set is mastered by Howard Givens, so it’s a given that this sounds pretty awesome beginning to end. As one might expect, the set begins crinologically with the first three eons: “Hadean Eon,” which is basically the planet before there was life. “Archaen Eon” which represents the development of bacteria and single cell plants and animals, and “Proterozoic Eon” representing the slow transition to multi-celled and more complex variations; here is where we start hearing sampled bird sounds and water flowing and other environmental sounds intergrated with the swirling melodic textures within the fabric of the compositions. Together these first three eons are considered to be the Precambrian period, several billion years here represented in 23 minutes of music, but the disc’s final track is also “Precambrian,” adding another twelve minutes to that total. “Paleozoic Era” continues the journey forward through time, followed by “Mesozoic Era,” a time that witnessed the development of higher lifeforms, fish, algal colonies, eventually moving out of the water and onto land, large trees, and reptiles, and then the “Cenozoic Era” where mammals first appear. These three periods together are represented by another 22 minutes of flowing melodic ambient compositions. “Anthropocene” is a representation of the evolution of humankind to the present (and beyond), ‘the atomic age, and human impact on a global scale’ (from the liner notes). While the concept throughout certainly matches the foundations of the music presented, it would stand strong even without the story, meaning that it’s approached in a serious non-gimmicky way that can be appreciated on a number of levels. The “Precambrian” closer is not a recap of the first three, but an entirely new compostion, featuring a more percussive angle as well as some wordless female vocals. Across the album’s eight tracks, there’s a lot here to absorb, masterfully crafted with subtle complexities that reveal themselves over numerous plays.