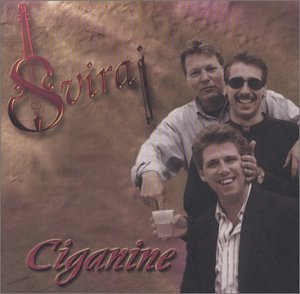 Omnium’s primary mission is releasing “folk music that rocks,” and they turn slightly aside from that with this disc. Though Sviraj (pronounced “svee-rye”) have energy to spare, they do not “rock” by any definition. This American band plays (so the liner notes inform me) “tamburitza,” which is a music tradition from the Balkans, combining Hungarian, Serbian, Croatian, and Roma (Gypsy) roots. There are none of the complex harmonies of Bulgarian vocal groups here, and the overall sound is rather like the Gypsy Kings with fewer guitars. There is plenty of passionate fiddling from Raczar Lopatic, who is considered one of the best Americans in the tradition, and I can see why. He is backed by Lenny Tepsich on upright bass, Danilo Yanich on bugarija (like a large guitar), accordion, and guitar, and Vlad Popovich on cello and brac (a small five-string guitar). All except Popovich sing, often in harmonies a little reminiscent of Mexican folk music with a Gypsy tinge, though the a capella “Ajde Jano” has a great sound. Occasionally they venture into one of the most intriguing Balkan traditions: odd meters. “Bitola” is a mid-tempo 7/8 song, and “Stacy’s Recenitsa,” the single instrumental piece on the disc, is 7/8 so fast it feels like fast 3/4 with a stuttered rhythm.