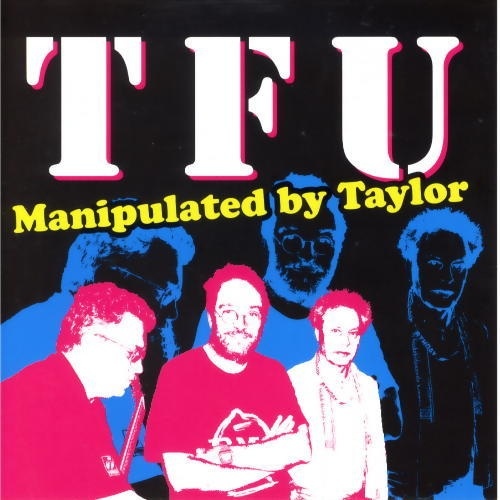 The ten tracks here were sourced from a September 2005 live show in Copenhagen, then processed and remixed in the studio. Taylor is of course jazz / experimental guitarist Robin Taylor, and TFU – or Taylor’s Free Universe – is his five-piece improvisational unit who have been reviewed many times in these pages. For this recording, Taylor is joined by longtime mainstays Karsten Vogel (saxes) and Pierre Tassone (processed violin & piano), relative newcomer Lars Juul (drums & electronics) and new bassist Klavs Hovsman. This performance, like those before it, is a freewheeling ride that can jump off the tracks and go just about anywhere five imaginative musicians can take it. Sometimes it’s to familiar territory (jazz excursions with plenty of soloing from Vogel and Taylor), other times to less predictable locales (experimental rave-ups that know no bounds, or cyclical looping junkets involving the whole band) and all points between. But it’s the studio post-processing of the performance that gives this disc its unique character compared to all those before it. Although it’s done very judiciously, all sorts of unpredictable electronic sounds are derived from the source material, and mixed back with it, adding a whole new dimension to the TFU recorded experience. Still, at the heart of what’s here is a superb live performance.

Legendary Pink Dots - A Dream Is a Dream Is a Dream – This LPD DVD release is the earliest known live concert footage of the band, recorded live at De Vrije Vloer in Utrecht, Holland on January 21, 1987. At that time the LPDs were a six-piece band...  (2006) » Read more