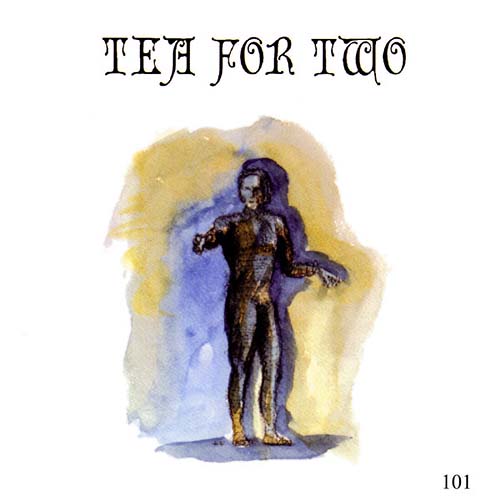 Neo-progressive act Tea for Two’s first album is appropriately titled 101 since this work is very much a freshman endeavor. The core of the group stems from vocalist Stephan Weber and guitarist Jens Oliver Sörup together with keyboardist and drum programmer Michael Schumpelt. From the opening song, “Drifting Apart,” it’s clear that the group is modeled in part on the current incarnation of Marillion, with screaming lead guitar, lush backing, and flashy synth lines. Weber is a bit of a strange warbler for a non-native English language singer, since his lead vocal is not dissimilar to IQ’s Peter Nicholls and his dramatic emphasis. In contrast, “Heaven (For Noone Else But Me)” is characterized by an additional female vocal harmony from Ruth Sharp. Schumpelt appears to have the heavy symphonic keyboard foundation down, as evidenced on transitional interludes such as “Bitter Sweet,” which serves as an introduction into “All Too Late,” a morose ballad of lost glories. The two big pieces are the eleven-minute title track and the album’s closing composition, “Last piece...” The former is a slow-paced ballad that ends with a Saga-like theme and a syncopated riff for piano, guitar and drums. Lyrically the subject matter is all common ground area; no extended story telling necessary. Not a bad attempt for an initial work by a band pegged in a genre already stuffed with similar elements and less originality.

The Goats Have Black Eyes Too