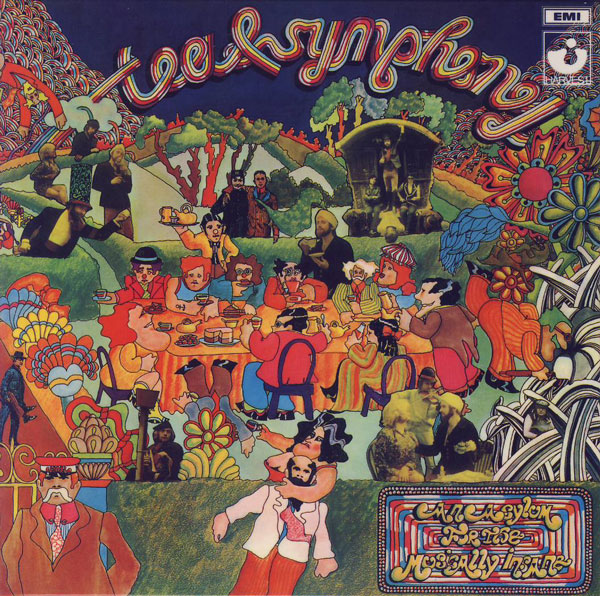 There's not two albums like this in the world (with the possible exception of the band's second album, Jo Sago, not yet out on CD). Tea and Symphony were a trio of Jef Daw (guitars, flutes, cello), James Langston (lead vocals, guitars) and Nigel Phillips (keyboards, recorders, mandolin, percussion). Together they made acoustic music so outrageously weird it's almost unbelievable. It's hard to say what's more disturbing, Langston's evil, cackling vocals (which stylistically resemble Phil Judd on the first Split Enz album), or the ghoulish diminished tonality running through many of the songs, even present in the vocal harmonies. Only a couple of tracks have real drums, most of the percussion consists solely of hand-drums and cymbals operated by Phillips. Strawbs bassist Ron Chesterman sits in on a few tracks, but most of the songs are bass-less as well. What I'm trying to say is that Tea and Symphony's sound is basically stripped-down and claustrophobic, at least for the first half, consisting mostly of two guitars and hand-drums over which Langston caterwauls zombie-like. A few songs feature recorder and flute, and the opening song "Armchair Theatre" pierces you straight between the eyes immediately with its liberal garnish of odd sound effects, kazoos and unusual percussion. The second half has a couple of longer songs ("Terror in My Soul,” "Nothing Will Come of Nothing") to which Phillips contributes organ, piano, tympani, and harpsichord. Only the bluesy "The Come On" has a typical rock arrangement, featuring the rhythm section of fellow townsmen Locomotive. That's the track they apparently used to promote the album, but the thought that they actually expected radio stations to play anything from this album is more bizarre than the music itself. Musically only one thing even remotely resembles it, the drugged-out folk of Witthuser & Westrupp, yet Tea and Symphony truly inhabited an alien world all their own.

Kenso - Kenso II – Another welcome reissue, prices for original LPs of Kenso's extremely rare first and second albums have been soaring skyward in the last few years, beyond the reach of the average progressive music...  (1993) » Read more