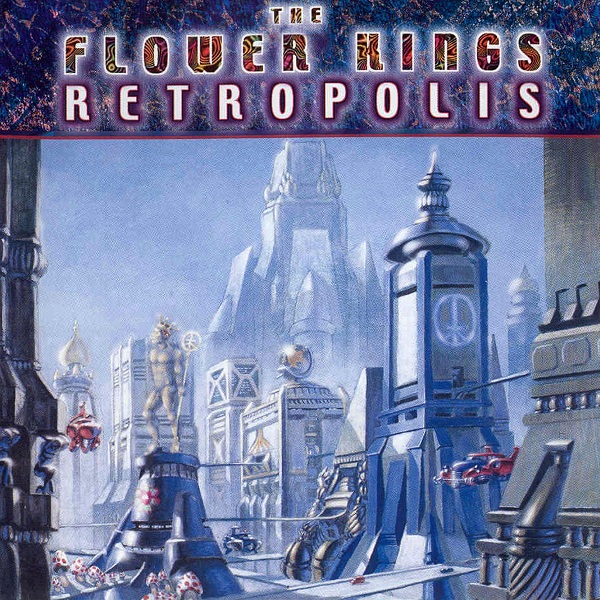 For starters, Retropolis is a commercial progressive album. It's definitively got wide-audience appeal. We find here a balanced mix of vocal (with a tone reminiscent of John Wetton's) and instrumental parts; a rightful blend of simple, easy-driven and more complex instrumental passages played in such a precise way that it has to please a lot of prog amateurs. And this is one of the strong points of The Flower Kings: their flawless, strong rendition of what may be simpler pieces at the start. Another strong point, that goes along with the musical expertise, is the ability to introduce, settle, explore and then bring back home musical themes. It is done in such a way that just about everyone can find something in here to listen to, even commercial radio listeners whose definition of progressive lies exclusively with Pink Floyd and Kansas. Yes, you won't find any ground-breaking, earth-shattering music in Retropolis. But this doesn't mean at all that there are no charms to be found. The atmosphere is bright and clear in general. There are no dark and overtly complex passages as there was with their Swedish compeers Änglagård. The open tones gives the music a wider mass-appeal than Echolyn's. Retropolis is a prog album that does a lot to bring the music under the accessible realm while managing to stay away from the oft-criticized "neo"-logisms. Recommended to just about anyone wishing to first listen to a good deal of finely crafted, strongly rendered, open music, and then to whistle along on the lighter passages. A very good prog "song" album, Retropolis will surely fare quite well.

The latest release from Roine Stolt and Co., Retropolis, is a natural follow-up to last year's Back in the World of Adventures. The variety dominating that album is present here also, but the overall mood on Retropolis is more laid back in a Pink Floyd kind of way than the last album. Don't get me wrong, though. Other than the occasional vocal similarity, the music doesn't sound overly Floydian — with the exception a part in the middle of "Retropolis by Night," which has a very "Welcome to the Machine" feel, and "The Road Back Home" with its alternating vocal lines. Other influences are more abundant. "Silent Sorrow" has a very Beatles sound for example. Most of the tunes here flow in a relaxed mid-tempo groove. The songs don't drag along, but they aren't fast paced rockers either. Not attempting to fix the unbroken, The Flower Kings continue to entertain with long instrumental sections separating the vocal parts nicely. These instrumental excursions are perhaps The Flower Kings' greatest asset. Most of the tracks have at least some vocals, but out of the 70 minutes of the album, at least half is vocal free. The vocals sound somewhere between Pink Floyd, Steve Hackett, and John Wetton — especially the first part of "The Judas Kiss," which sounds remarkably like something from Starless and Bible Black. It's hard to pick just a few bands that these guys sound like — ELP, King Crimson, Yes, Steve Hackett, Pink Floyd are all in there, plus several more. Actually, a few of the tracks, especially "There Is More to This World," bring to mind The Chris Squire Experiment — sort of Yes, but not quite. Canine special guest appearances on not just one, but two(!) tracks — how can you go wrong?

5uu's - Point of Views – From the beginning, led by drummer Dave Kerman, 5uu's started out as the west-coast answer to the European RIO music of the day. Their first mini-album Bel Marduk & Tiamat echoes that more...  (1996) » Read more

Henry Cow - Western Culture – By the time they got to 1978 and the recording of Western Culture, Henry Cow were in the process of breaking apart. Fortunately for us, they saw the project through to its completion, for it is full...  (2002) » Read more

Overhead - And We're Not Here After All – Overhead is a Finnish band consisting of Alex Keskitalo on vocals and flute, Jaakko Kettunen on guitar, Janne Pylkkönen on bass, Tarmo Simonen on keyboards, and Ville Sjöblom on drums. After...  (2009) » Read more

Eccentric Orbit - Attack of the Martians – Eccentric Orbit was founded by bassist Bill Noland, and includes Mark Cella (Pye Fyte) on drums and Madeleine Noland and Derek Roebuck on keyboards. The keyboard sounds veer heavily towards the 70s,...  (2004) » Read more