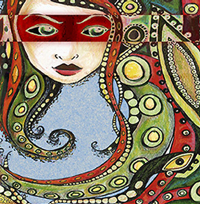 The Red Masque is a five-piece of guitars, bass, drums/percussion, keyboard+harp, and lead voice. Their promo package proclaims “...An intense and angular blend of avant rock...” and “..One of [Philadelphia’s] most experimental and forward thinking bands.” While echoes of Starless era Crimson occasionally haunt the instrumental attack on the first two tracks (each 10+ minutes in length), there is a strong jazz meets free metal improv undercurrent that creeps to the surface with regularity, mingling with the jagged rhythms and noisy industrial textures. Vocalist Lynnette Shelley adds to the din, sometimes with ethereal vocalizations and other times with a more aggressive attack with lyrics. A third track that clocks in at 13+ minutes brings their sound a couple steps closer to prog-rock territory, with a more structured, composed sound with a greater role for keyboards and guitar, vaguely reminiscent of early Van der Graaf Generator. Indeed, the band gets an A for effort, but there are some problems: while the singer has a powerful voice, she more than occasionally has trouble staying in key, and at times the band gets a little sloppy with their execution and timing. Neither problem is insurmountable, and with a little more time the band should tighten up their sound; in all a fairly promising debut.

Cast - Legacy – For their ninth studio album, Cast present another strong set of tunes in their established mode. While there are strong contributions from all members, the keyboards of Alfonso Vidales are clearly...  (2000) » Read more