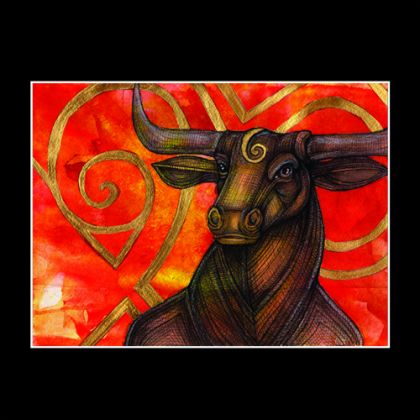 The Red Masque's releases up to now have been mixed bags for me, with some tracks I really like and some that I'd just as soon skip. With Mythalogue, they've finally hit the balance of dark progressive, avant, and theatrical vocals that works consistently from start to finish. After a short, creepy ambient introductory track, they slam us with "The Wendigo," an 11 minute epic of jarring odd-meter riffs, floating vocal melodies, and strange organ diversions. Yes, The Red Masque is here, and they mean business! Lyrical themes still tend towards the supernatural, generally on the darker side of moods. As the album title suggests, mythology is the primary inspiration, featuring such titles as "The Song for Icarus," "The Minotaur," and "The Ruins of the Palace of Minos." The lyrics avoid cringeworthy fantasy cliches; I'm occasionaly struck by an overly grand turn of phrase, but not enough to kill my enjoyment. In the past, when The Red Masque has gone off on their more avant tangents, with screaming, spoken word, crashing dissonance, and so on, they've sort of lost steam, giving listeners something to be endured rather than enjoyed. But there's a section of fair length in "The Labyrinth" where they get really out there and I don't mind. They're simply getting better at realizing their intentions. While keyboards make appearances here and there, the arrangements are mostly about the interaction between the bass and guitar, and the bass usually has a grungy overdriven fuzz to it. As "bonus" tracks, we get a live rendition of "Polyphemus" and a short studio recording called "The Hallowed." They are non-essential, but don't detract from the overall quality. Bottom line is, best one yet from this band, and a welcome addition to the Beta-lactam Ring roster.