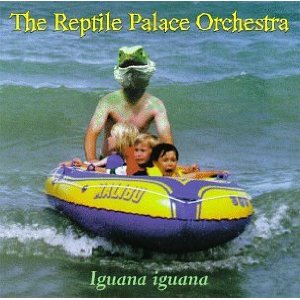 With the same globe-hopping disregard for genre exhibited by labelmates Boiled in Lead, Reptile Palace Orchestra present a collection of Eastern European dances, twisted folk tales, Colombian fishing songs, and anything else that crossed their minds. The overall sound is more acoustic than BiL, with violins and clarinets dominant, and there’s even a touch of off-the-wall retro-swing in the mode of Squirrel Nut Zippers. The musicianship, while never especially flashy, is eclectic and maintains a loose, light touch. But don’t make the mistake of thinking there’s any sort of respectful adherence to tradition here. Just when you think you’ve got them pegged, RPO will throw a big curve. “Gankino Horo,” described in the liner notes as a “traditional Bulgarian kopanica” (a dance in 11/8), slowly mutates into an electric violin showcase with intense narration from vocalist Anna Purnell. As an added bonus for progressive music fans, RPO throw in a cover of Eno’s “Sombre Reptiles” – a natural for them.