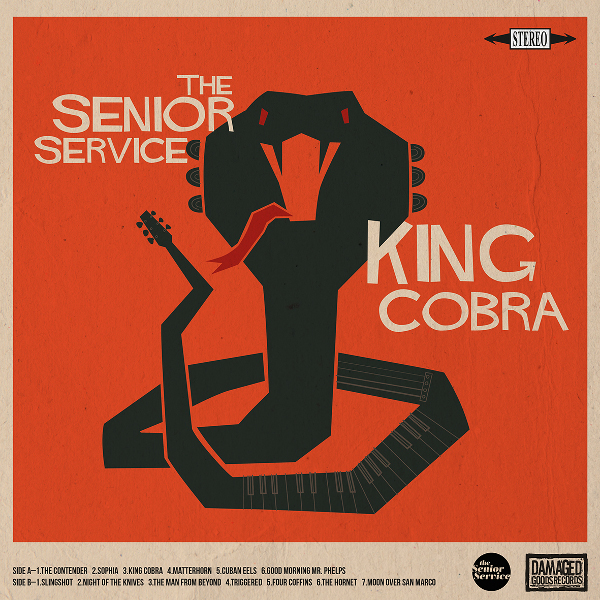 UK instrumental group The Senior Service released their second album King Cobra on April 27, 2018. Fans of their 2016 debut album The Girl in the Glass Case will be pleased with King Cobra’s new collection of 13 soundtrack-inspired tunes. Be prepared to be whisked back to the days of 60s spy movies with twangy guitar, churning organ, pumping bass, and funky drums. The album kicks off in high gear with “The Contender,” a mixture of surf music, sci fi, and Brit spy movie, that recalls The Shadows’ signature instrumental “Apache.” King Cobra is a hypnotic release drawing you closer until it can latch onto you with its bite. Like the opening track, the remaining instrumentals feature surf guitar, Ennio Morricone spaghetti western themes, James Bond soundtracks, Bossa Nova beats, and tremolo guitar. Other standout tracks are the title track with pseudo sitar and tabla mixed with spaghetti western music, the James Bond-styled “Matterhorn,” the Mission Impossible referencing tune “Good Morning Mr. Phelps” that also flirts with The Zombies’ “She’s Not There,” The Senior Service’s single “Slingshot” that resembles surf guitar king Dick Dale, the brass laden latin beat of “Night of the Knives,” and the throbbing bass of “Triggered.” So beware the bite of King Cobra, this is a killer album!

Strange Days in the Museum