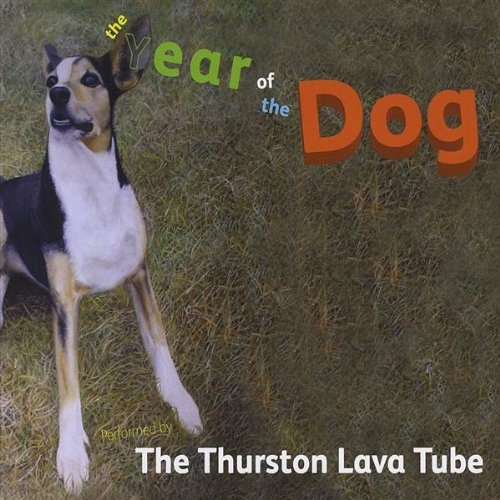 As a late-comer to the warped avant-surf world of Alan Jenkins and The Thurston Lava Tube, I’m playing catch-up with the back catalog. I already covered the reissue of Free Surf #1 & #2, which dated from 2001; The Year of the Dog is their 2009 offering, and shows a fair amount of growth from those early recordings, though not any drastic change in style. The set starts with “The Poisoned Pawn Variation,” which sounds like a lost gem by the Ventures or Surfaris, a minute and a half of twang guitar and buzzing combo organ with a driving beat. As an interesting contrast, I recently listened to Bill Frisell’s Guitar in the Space Age! (2014), which pays homage to such guitar classics as “Pipeline,” “Surfer Girl,” and “Rebel Rouser.” And as much as I respect Frisell’s playing, his recording comes off as stuffy and kind of dull compared to the Lava Tube, whose version of “Pipeline” on this album beats Frisell’s hands down. In addition to “Pipeline,” the covers on The Year of the Dog range beyond just surf to “I Wanna Hold Your Hand” and “Ziggy Stardust,” both of which make perfect sense once you hear them, and are a lot of fun to boot. But those three covers leave 12 originals, and they are the real key to the band’s success – a band cannot survive on stunt covers alone. In addition to having the standard tropes of instrumental surf music down pat, they throw unexpected curves, like the oom-pah-pah accordion in “Where Is the Hyena Magnet?” or the electronic noises in “1e4 Nc6” or the free improv section of “Action Dog.” One thing that’s carried on from the days of Free Surf #1 is the looseness of the performance. These recordings are not perfect renditions – nor should they be. The slight imperfections are minor compared to the spirit of the playing. This is maybe a lesson Bill Frisell could learn from The Thurston Lava Tube: perfection is often the enemy of enjoyment in music. Don’t get me wrong – The Year of the Dog is not sloppy, just sprited, and you can tell they didn’t use 35 takes of each track to get every note in place and drain the feeling out of their playing.