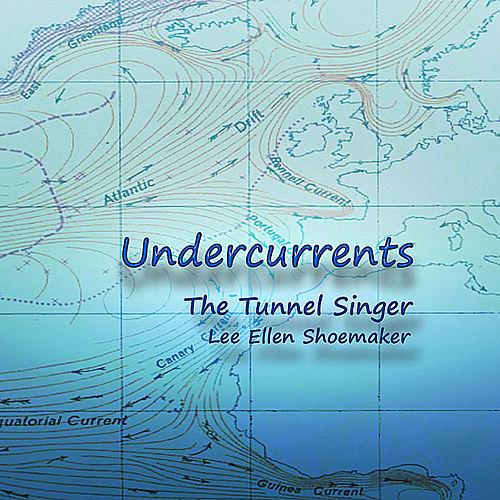 The theme of this latest offering – the ninth from Lee Ellen Shoemaker, aka The Tunnel Singer – is various deep water undercurrents, with appropriately named titles like “Cedros Trench,” “Nares Strait,” “Euxine (Black Sea)” and so on. This release breaks with the past few by inclusion of other instrumentation besides voice and a studio simulated reverb profile of the ‘Cistern Chapel’ at Port Townsend, Washington, which she has been using off and on since her third album Water Birth (which was recorded live at the cistern). Here we have didgeridoo accompaniment on all but one of the ten tracks (courtesy of Greg High), as well as some subtle background Indian drum loops on the album’s opening cut “Barbera Zephyr,” and perhaps others. Because of the rhythmic support that the additional instrumentation provides, the vocals tend to embrace a slightly more structured melodic approach, at times even approaching vaguely familiar themes in repetition, all drenched in heavy reverb, as opposed to the more free-flowing ambient improvisational style of much of her previous work. The vocal sustain becomes intense, even a bit disorienting, at times when the long reverb mixes with the instantaneous live voice, gently touching the dissonant edges where vocalizations past and present collide and overlay. It’s good to hear Shoemaker intrepidly taking her concept into some fresh new directions.

Seven That Spells - The Men from Dystopia – Who is the King of the Endless Riff? This Croatian band makes a credible case for their royal status on this release. The five tracks here, named simply with Roman numerals, flow without much...  (2009) » Read more