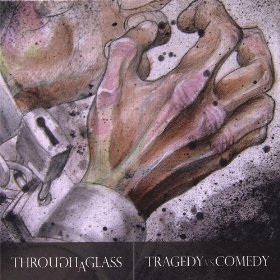 Through a Glass are a young (as in still in high school when this was recorded), Tennessee-based rock band. That’s rock as in two guitars, bass, drums, vocals, and lots and lots of youthful energy. The album title obliquely refers to a sixth band member who was tragically killed in a car accident, though the five songs on this disk (at 17+ minutes it’s more of an EP than an album) don’t delve into the sort of emotional soul-baring one might expect from that sort of experience. A big deal is also made on their web site and MySpace page that they are Christians, though again little of this is clearly evident in the songs. Other than some acoustic guitar interludes on “Hush,” the material is dominated by overdriven guitars, crashing drums, and lead singer Jeremiah Barnes’ impassioned rock vocals. He’s the band’s ace in the hole talent-wise and immediately reminded me of Matchbox 20’s Rob Thomas, though he also sounds like half the guys singing for bands like this. That’s my main gripe with the band and the album – they and it sound like lots of other bands and albums circulating these days. To their credit, for guys their age this collection shows tons of maturity and professionalism and if anything Through a Glass have a bright future ahead of them, as long as they can navigate today’s music biz. Good luck, kids.

Related artist(s): Through a Glass

Legendary Pink Dots - 25th Anniversary Single – 2006 marks the 25th anniversary of The Legendary Pink Dots and the band toured extensively in the US and Europe this spring and summer. It is rare occurrence that a band remains together this long and...  (2007) » Read more