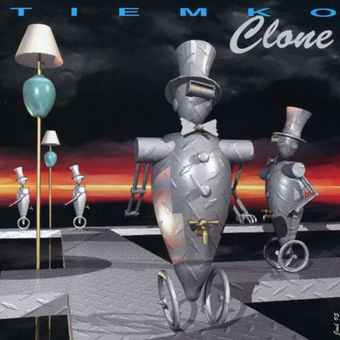 Tiemko are a French trio (here with guests) who have been around since the late 80s. The present offering is their fourth album, and it's been at least several years since their last release Parade. I have never been too enthused about this group. The lack of a full time bass player is especially noticeable in the light of all the tinny scratchy metallic synth patches they use, and the overall sound can be quite cold and clinical especially considering the angular scales the band is so fond of. To boot, Tiemko are now taking an attempt at more song oriented music (I really want to say pop, but Tiemko are still a bit too weird for pop) with dance beats and strange yet predictable song structures. Although Tiemko haven't fully eschewed their progressive roots – there are a couple of long tracks here more in the vein of Parade or Océan – the song-oriented music here may be a bit too far outside the genre usually covered here in Exposé. Overall, Clone leaves me feeling funny, I suppose this is a bit outside my tastes.

Sadly no longer together, Tiemko were perhaps the most consistently inventive and musicianly of the new wave of French prog on Musea. After two uneven but promising albums, the promise was at last fulfilled with the intense Parade. Clone consists of their final tracks as a band. It kicks off with Tiemko as we know them, with the instrumental opener "Double Face." Housed in its nearly seven minutes are the sort of complex metric changes and fierce dissonant motives they became famous for with Parade. Eric Delaunay is still the best drummer in France today, hands down, while Jean-Jacques Toussaint is one of the few who is consistently innovative with his digital synthesizer voicings, never falling back on clichés or attempting to sound like analog. On the down side of Clone are the vocal tracks. Not all are bad – "Decadanse" has an air of Halloween – but most are anything but substantial. I personally could have done without the straightforward rock of "Rock & Roll Alice" or the synth-poppy "Desamour." Still, the vast majority of the album is indeed instrumental, and while we are treated to fleeting, mechanical-sounding passages (the electronic percussion of "L'Eternite Comme Si Vous y Etiez" comes immediately to mind), it's the long instrumental pieces (the title track and the 16-minute "In Memoriam" in particular, as well as the excellent aforementioned "Double Face") which make this album come alive. One may remember that Parade consisted almost entirely of short instrumental pieces. Clone proves they can indeed hold their own over the longer pieces, a fact which will relieve those who remember their seemingly endless title-track to Océan. All right, so Clone did come off as a bit of a disappointment, but it could have been much worse. (Imagine an entire album of those vocal tracks! Ecch!) The instrumental tracks prove they still have it, and serve as a fitting memory for three of France's most talented musicians.

Legendary Pink Dots - Seconds Late for the Brighton Line – 2010 marks the 30th anniversary of this band as well as a major change to their lineup. Long time band member Niels van Hoorn departed because of the demands of constant touring, reducing the band to...  (2011) » Read more

Djam Karet - No Commercial Potential... and Still Getting the Ladies – In some respects, Djam Karet can be viewed as a band with a split personality. Sometimes they are a tightly rehearsed unit performing composed music; sometimes they are purveyors of ambient...  (2005) » Read more

Various Artists - To Cry You a Song: A Collection of Tull Tales – At first thought, this disc had the possibility of being not just another tribute album with renditions of classic songs by wimpy bands and weird line-ups. But as with some expectations, they can tend...  (1996) » Read more

John Martyn - Sweet Certain Surprise & Live at the Bottom Line – What is remarkable in this last set of two live rarities from guitarist and vocalist John Martyn is that the two performances continue to show an expanding range within different periods of the...  (2002) » Read more