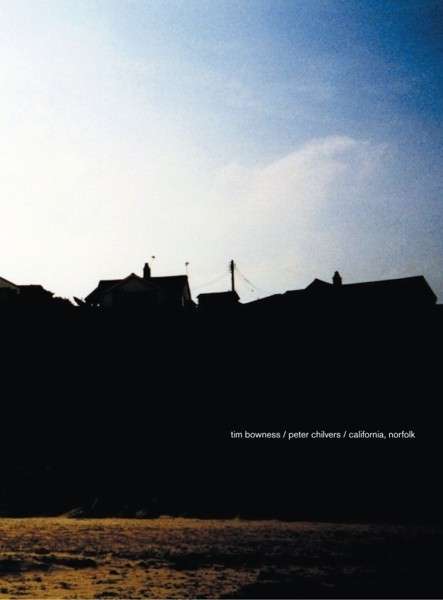 California, Norfolk was a Tim Bowness (No Man, Henry Fool) and Peter Chilvers (Samuel Smiles, Brian Eno) collaboration originally released in 2002. It was Burning Shed’s (which Bowness and Chilvers co-founded) first ever release, available only online in limited numbers with minimal promotion. Nonetheless, it managed to sell out quickly. A follow up was planned but never materialized, short of a collection of alternative mixes and outtakes called Overstrand (2003). Seeing that copies were fetching insane figures on eBay, Bowness and Chilvers decided it was high time to reissue California, Norfolk, and in typical Burning Shed fashion it’s been beautifully packaged as a two-disk set in a hardcover book with expanded liner notes and Carl Glover artwork. This package is about as perfect a documentary about two artists brief but potent partnership as I can imagine. The first disk is the full California, Norfolk album while the second disk contains Overstrand plus two leftover pieces (labeled Sidestrand), and four live recordings. Despite the sprawling nature of the collection, and considering it spans over 10 years of the musician’s lives, there’s a marvelous continuity to it all. Chilvers excels in the sort of minimalist soundscapes that Eno/Fripp fans drool over while Bowness is a master of lyrical story telling. Other than the rhythmic and almost club-y “Criminal Caught in the Crime,” there’s a uniformly somber and reflective wistfulness to the songs. The marriage of Bowness’ ethereal vocal caresses and Chilvers’ modernist textures and processed loops (using mainly keyboards though a diverse assortment of instruments was employed) is a powerful match. Whether the songs are drawn from their work in Samuel Smiles in the 90s, or from an intimate live recording in 2010 it all hangs together and is a textbook example of how to create minimalist yet evocative musical movies.

Various Artists - Back against the Wall – Billy Sherwood has certainly found a comfortable niche to show his knowledge and appreciation of classic 70s rock. Gathering an all-star cast to re-create the second most well known Pink Floyd...  (2007) » Read more