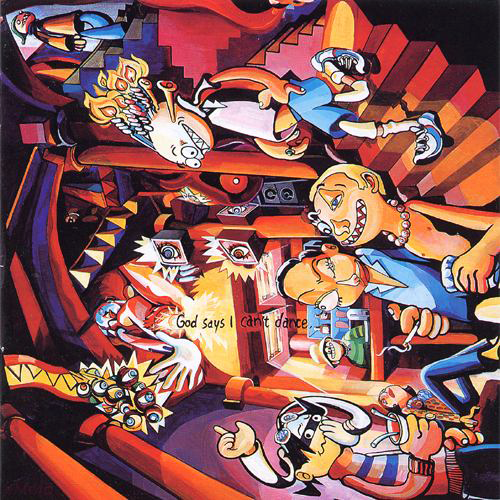 As well covered in Exposé, Tipographica are one of the best new music ensembles around, a band better suited to those with largely experimental tastes. After a superb debut and equally interesting live album, the band is back with their newest studio release, an album which surprisingly enough shouldn't surprise anyone now. God Says I Can't Dance is like a step back to the first album, with the same very staggered rhythmic structures (like Zappa's early 70s bands performing Jon Hassell's "Chor Moire" from Dream Theory in Malaya for an upcoming Recommended release) and whimsical melodies/anti-melodies. I was very impressed with the way the band would whip it out on the live album — in true Zappa style with great solos from the various instrumentalists (often guitar, sax and trombone), so I was maybe a bit disappointed that there wasn't more of that on the new one. Who’s to complain though, as the band hasn't lost any of their edge — they're still tight, spirited, humorous, and cutting-edge. Although this isn't much of a development on past styles for the band, Tipographica are still light years away from many of their contemporaries and this is as good as any of their releases.

The definition of progressive rock is growing wider each year. There is a trend that consists of injecting healthy doses of fusion, what with a jazz rock aura in the neighborhood. All over the worldwide prog rock community we have listened to great bands pushing forward the basic definition of the genre and to this extent, Tipographica's God Says I Can't Dance is an enjoyable and intricate sample. Master structure builder Tsuneo Imahori sketches angular foundations that could be materialized as Picasso paintings. Complex odd rhythms over which flurries of notes are often flying by, while the sax and trombone are anchoring the modal atmosphere. On the opener, "Friends," there is a definite nod to the work of orchestral Zappa. A drawback in this maelstrom of sonic explorations is that there are but few passages of 'letting go' in which an instrument can take the listener from point A to B without going through the whole museum of Modern Arts. But this is overcome by the compositional work that doesn't fail to attract the listener's attention. We're clearly out of 'traditional' prog rock here, and it could very well be that people defining progressive music by standards such as Yes and Pendragon would frown upon the seeming lack of 'song' patterns, not to mention the harmonic explorations. On the other hand, fans of the orchestral work of Francesco Z. will find here an ample terrain to explore. God said Imahori can't dance, but it could very well be that God has definite plans as to underline 'progressive' in 'prog rock' for the future.

By now everyone should know who these guys are and have some kind of idea what they sound like, even if you've never actually heard anything by them (unless you've been living in a cave, or reading one of the other magazines). This is the follow-up to last year's outstanding live release The Man Who Does Not Nod. Listeners who are wooed only by pretty melodies, thick fat blankets of synthesizer effects, and an occasional measure in odd time may not find Tipographica's music that appealing. On the other hand, those who are beckoned by impossible-to-play counterpoint and revel in the pure mathematical complexity of six players each in their own time signature should find much here of interest. Indeed, Tipographica's music at times seems like the ultimate statement of musical unpredictability, until you give it a many close listens and really get to know it. Fans of Frank Zappa, Henry Cow and Canterbury — or anybody moving in that general direction — should find Tipographica's playful and convoluted compositions to be more than adequate stimulus amid the plethora of progressive rock bands that refuse to progress. All the compositions are penned by guitarist Tsuneo Imahori, the rest of the lineup being bass, drums, keyboards, trombone, and sax. No vocal pollution to get in the way of the music. Compared to last year's live album, this one has a more composed feel, a bit closer to their studio debut. Any way you look at it, this one is a total smoker; Tipo has done it again!

Virgil Moorefield - Distractions on the Way to the King's Party – Moorefield was a guitarist (one of many), then drummer, with Glenn Branca's ensemble for many years. This is his first album in a decade and his first for Cuneiform. He plays drums here and did all of...  (1994) » Read more

Oho - Bricolage – Baltimore based Oho doesn’t put out a lot of product, but when they do, they do it right. Their latest offering is a combo CD+DVD covering material recorded over a 24-year period, although most...  (2008) » Read more