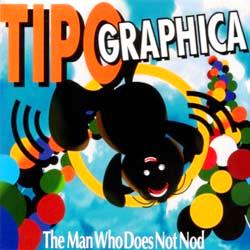 After Tipographica's amazing 1994 debut, the big question was: could these guys pull it off live? Well, here's the living proof. Actually, Tipographica has been together since around 1989, gigging regularly ever since. In the process, they have amassed a loyal following of Japanese fans ready for something new, different, and challenging. In that time, the band has grown as well: a well-circulated live tape from '91 shows a very tight and precise Canterbury outfit, but nothing like what they are today. Here the band smokes through seven numbers, including many that were not on last year's album (and those that are have been formidably rearranged), taken from three different live dates, proving once and for all that the high degree of musicianship on their debut album was no accident or studio gimmickry. So if you missed that debut, this might even be a better place to start. If one appreciates Zappa, Hatfield, Henry Cow, and some of the more adventurous stuff on ECM, then this is definitely a must-have. On tracks like "King's Golden Toilet," "Naked Lunch," and "The Turf Have Disordered Gravity" they completely cut loose and add some incredible solos, mostly for saxes and guitars, while on "Smell of Gunpowder, and The Flavor of She," they break out into extended atmospheric explorations. This, combined with the tightly composed material culled from their debut makes for a perfect album. What can I say? Frank would be proud!

Although this fabulous Japanese quintet made a big splash with their self-titled debut last year, that album was actually recorded in 1992. This new release, a collection of seven live performances, was recorded throughout the year of 1995. Two tracks from their debut are included here, a hyped-up version of "Naked Lunch" and an extended version of "The Turf Have Disordered Gravity" complete with bass solo from the band's newest member Hiroaki Mizutani. The sound quality superb, even surpassing the first album, largely due to the 8-track direct-to-digital recording method employed. In fact, it sounds like it was recorded live in the studio. Everything is clean and crisp. And the performances speak for themselves. Impossibly difficult compositions and timing are pulled off flawlessly. The band's wonderful sense of humor is uncompromising, although the sound here is heavier and more high energy than before. The other five tracks are culled from earlier in the band's history, going as far back as 1988. Superb solos from all band members (yes, even the trombonist gets a soliloquy on the gentle closing ballad) combined with the higher energy level and better sound make this release even more essential than their first. You may not be able to find this album at a comfortable price point, but the content warrants every penny. This is the best live album of the 90s, highest recommendation.

Sonus Umbra - Snapshots from Limbo – I was a little worried when I saw the names Luis Nasser and Jeff Laramee in the credits for this disc. They are both in the band Kurgan’s Bane, along with singer Lisa Francis (who provides guest...  (2002) » Read more